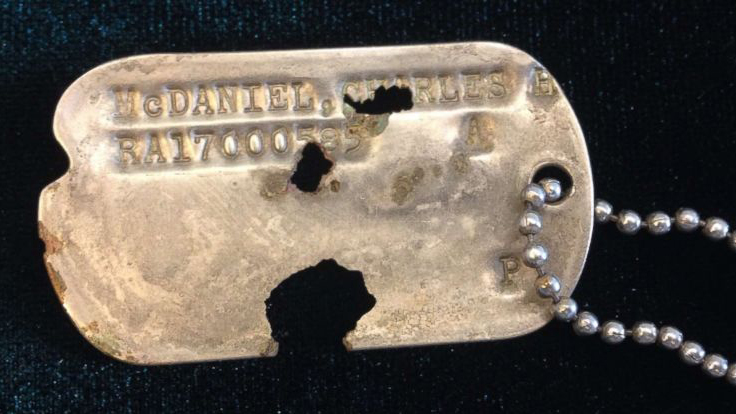 Luis Martinez/ABC News(WASHINGTON) — President Donald Trump announced Thursday that the remains of two U.S. Army soldiers missing in the Korean War nearly seven decades ago have been identified from the 55 boxes turned over by North Korea this summer.
The president tweeted out their names, noting they were "identified as a result of my Summit with Chairman Kim," referring to North Korean leader Kim Jong Un.
"These HEROES are home, they may Rest In Peace, and hopefully their families can have closure," Trump tweeted.
The two soldiers were Master Sgt. Charles Hobart McDaniel and Private First Class William H. Jones who both went missing in November 1950.
McDaniel was a medic with the 8th Cavalry Regiment Medical Company, supporting the regiment's 3rd Battalion when he was reported missing in action on November 2, 1950, after his unit fought with Chinese military forces near the village of Unsan in North Korea.
Jones was a member of Company E, 2nd Battalion, 24th Infantry Regiment, 25th Infantry Division, who was reported missing on November 26, 1950, after his unit fought Chinese forces near Pakchon, North Korea.
Shortly before the president tweeted, Kelly McKeague, the director of the Defense POW/MIA Accounting Agency (DPAA) told reporters two of the 55 boxes contained two partial skulls that had dental remains, along with two clavicles. DPAA researchers used dental records, chest x-rays and DNA samples to conclusively identify the remains of the two soldiers.
The Army notified both families earlier this week that the remains of their loved ones had been recovered.
McKeague said the names were being announced "as part of the National POW/MIA Recognition Day" on Friday.
On August 1, Vice President Mike Pence was in Hawaii to preside over the repatriation ceremony for the remains included in the 55 boxes.
On Thursday, Pence presented a flag that covered one of those cases to the Korean War Veterans Memorial.
"As the son of a Korean War combat veteran, I may have no greater honor in my service as your Vice President than the honor that was afforded by me by our Commander in Chief to attend that ceremony," said Pence. "And receive those heroic remains and this flag on that day."
The transfer of the boxes was a direct result of President Trump's June 12 summit with North Korean leader Kim Jong Un.
After the boxes were returned to the United States DPAA officials said they would begin immediate forensics work to identify some of the remains.
Among the 55 boxes, DPAA researchers also recovered a dog tag that belonged to McDaniel.
The dog tag was among other American-made artifacts including boots, buttons, canteens and a steel combat helmet found in the boxes.
In August, DPAA officials presented McDaniel's dog tag to his two sons Charles McDaniel Jr., 71, and Larry, 70. DPAA officials said at the time that they did not know whether McDaniel's remains might also be included in the 55 boxes.
DPAA officials said they did not know whether McDaniel's remains might also be included in the 55 boxes, but that did not matter to McDaniel's sons.
“This is my father,” said Charles Jr. "We’re just overwhelmed that out of all these boxes that came back, and out of all of these thousands of people, we’re the only ones that have certitude."
DPAA estimates there are 7,684 Americans unaccounted for from the Korean War. Of those, approximately 5,300 are believed to be located inside North Korea.
From 1990 to 1994, the U.S. recovered 208 caskets with as many as 400 remains contained inside of them, DPAA said. From 1996 to 2005, 229 additional caskets were found and transferred.
DPAA has identified locations where they believe there are major concentrations of remains inside North Korea.
Next Wednesday, the United States will repatriate to South Korea 64 sets of remains of South Korean service members that were included in the 208 caskets recovered from North Korea in the early 1990s.