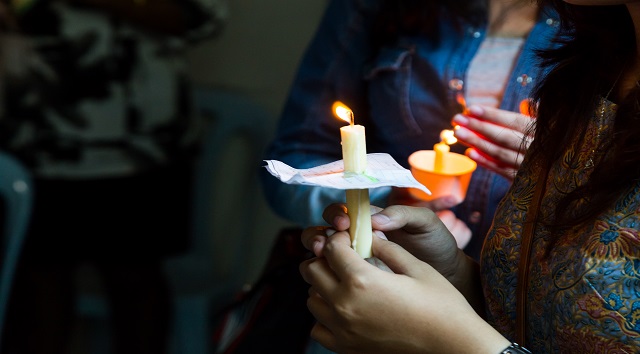 iStock/Thinkstock(AMES, Iowa) — As hundreds of students held an emotional vigil on the campus of Iowa State University, their tears glistening in candlelight, the mother of slain champion college golfer Celia Barquín Arozamena spoke out half a world away.
"It has been bad luck," Miriam Arozamena said Wednesday, addressing reporters for the first time near her family home in Spain. "This could have happened anywhere in the world. This guy went to kill a woman and he came across my girl."
Barquín Arozamena, who was named Iowa State female athlete of the year after winning the Big 12 women's golf championship earlier this year, was attacked and stabbed to death on Monday morning on a golf course near Iowa State in what authorities called "a random act of violence."
The suspect in her killing, Collin Daniel Richards, 22, who had been living in a tent next to the golf course, had purportedly told an acquaintance that he wanted to "rape and kill a woman," according to a criminal complaint.
Barquín Arozamena's boyfriend, Carlos Negrin Bolanos, spoke at the vigil, telling the crowd of the life they dreamed of having together.
"We imagined and dreamed our wedding, we dreamed the music for our wedding, we dreamed our dream house," said Negrin Bolanos. "We had named our kids. We were thinking ahead really quick. But you know, you know…"
He said he is not surprised by the outpouring of grief from around the world.
Good people like her "shine so bright that they outcast any wrong action," he said.
Hundreds of students gathered Wednesday night for the vigil near the Campanile, a bell tower on the Iowa State campus in Ames.
They held candles and comforted each other with hugs. Many wrote condolence notes and shared stories of Barquín Arozamena.
"There's a new angel in heaven with an extra bright halo," Jim Alleman, Barquín Arozamena's engineering professor, told the crowd.
Investigators in Iowa are still trying to determine why Richards, who police said has no known address, targeted Barquín Arozamena on Monday morning.
She was stabbed multiple times — suffering wounds to her torso, neck and head — before her body was dumped in a pond on the golf course, according to a criminal complaint against Richards.
Richards was charged Monday with first-degree murder and is being held in jail on $5 million bail.
"I hope people reserve judgment until after the trial," Richards' attorney, Paul Rounds of the Story County Public Defender's Office, told ABC News when reached by phone on Tuesday. He declined to comment further.
Richards, who has a lengthy criminal history, was arrested on Monday after approaching police on a tent encampment next to the Coldwater Links public golf course. He had several fresh scratches on his face and was attempting to conceal a deep laceration to his left hand, the criminal complaint said.
After allegedly killing Barquín Arozamena, Richards showed up at an acquaintance's home near the golf course covered in blood, sand and water and asked if he could take a bath, according to the complaint.
Richards was ordered to return to court Sept. 28 for a preliminary hearing.
Copyright © 2018, ABC Radio. All rights reserved.