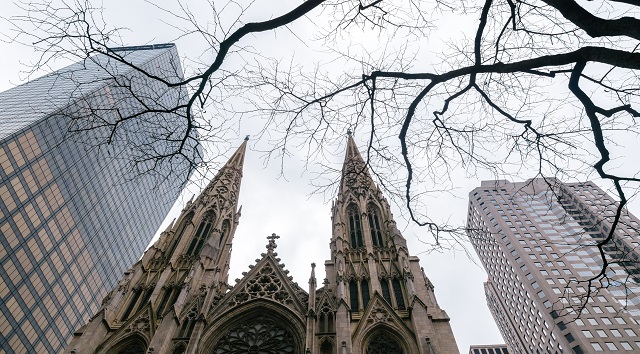 iStock/Thinkstock(NEW YORK) — The archbishop of New York has appointed retired judge Barbara Jones to be an independent reviewer of sexual abuse cases. Most recently, Jones reviewed documents in the Michael Cohen case.
Archbishop Timothy Cardinal Dolan conceded in a press conference Thursday that the "summer of hell" had laid bare the scope of abuse and inaction of bishops across the country, leaving Catholics "bewildered, frustrated and angry."
Earlier this month, New York Attorney General Barbara Underwood issued subpoenas to every Catholic diocese in the state as part of an investigation into how the church reviewed and possibly covered up allegations of sexual abuse of minors. Local district attorneys would potentially prosecute any alleged crimes.
Dolan asked Jones to study the archdiocese and how it deals with accusations of abuse. She has been promised complete access to records, personnel and to Dolan himself.
"I have been assured that I and my team at Bracewell will have complete independence and unfettered access to all information, documents and personnel," Jones said during Thursday's press conference. "The cardinal has told me to leave no stone unturned."
The archdiocese has "robust infrastructure" to handle abuse cases, Jones said, adding that it’s now her job to determine whether that infrastructure is effective and sufficient.
Jones is a former federal judge and former federal prosecutor now in private practice. In April, she was appointed by Judge Kimba Wood to be an independent referee in determining which materials seized in the FBI’s raid of President Donald Trump’s personal attorney Michael Cohen's properties are subject to attorney-client privilege.
She was appointed to the federal bench by President Bill Clinton in 1995 and served 16 years in the United States District Court for the Southern District of New York. She was the judge who oversaw the accounting fraud trial of former WorldCom chief Bernie Ebbers.
Prior to her nomination she was an Assistant U.S. Attorney in the Southern District of New York, where she prosecuted mobsters. In her private work, she presided over the arbitration of Ray Rice, the NFL running back who was suspended after a video emerged of a physical altercation with his wife. She ultimately overturned Rice’s indefinite suspension.
Jones' appointment comes after an announcement by the U.S. Conference of Catholic Bishops Wednesday that establishes a hotline, monitored by a third party, to field complaints of abuse of minors and harassment of adults.
The attorney general’s office in New Jersey also previously announced the formation of a task force to investigate Roman Catholic dioceses in that state, New Jersey Attorney General Gurbir Grewal said.
The investigations follow a grand jury report in neighboring Pennsylvania, which alleged more than 1,000 victims of clergy sexual abuse over seven decades.
Following the announcement of the subpoenas in New York earlier this month, the archdiocese of New York said in a statement that the attorney general "will find the Archdiocese of New York, and the other seven dioceses in the state, ready and eager to work together with her in the investigation."
"Since 2002, the archdiocese has shared with its 10 District Attorneys all information they have sought concerning allegations of sexual abuse of minors, and has established excellent working relationships with each of them," the statement continued. "Not only do we provide any information they seek, they also notify us as well when they learn of an allegation of abuse, so that, even if they cannot bring criminal charges, we might investigate and remove from ministry any cleric who has a credible and substantiated allegation of abuse. We look forward to receiving the subpoena, and working with the Attorney General."
Copyright © 2018, ABC Radio. All rights reserved.