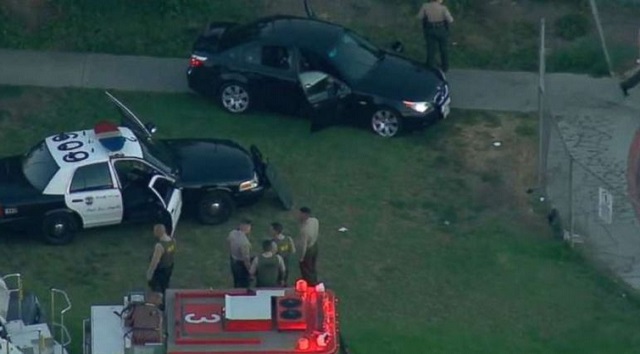 KABC(LOS ANGELES) — A pair of Los Angeles County Sheriff's deputies were injured in a fatal shootout on Wednesday after responding to a call about a man with a deadly weapon, authorities said.
The deputies were responding to a scene near a park in East Los Angeles around 6:30 p.m. when three suspects opened fire as the officers approached them, according to police. At least one of the deputies managed to fire back and one of the suspects were killed.
"They approached the vehicle, and the suspects inside the vehicle got out and engaged them with gunfire," L.A. County Sheriff Jim McDonnell said during a Wednesday press conference. "Both our deputies were hit. They went down and additional units responded and also, I believe, engaged the suspects.”
McDonnell said the officers were shot in the upper body area and were transported to a trauma center in serious but stable condition.
He would not disclose their identities, but McDonnell said the deputies were in their early 30s and "very season," with more than 10 years of experience.
Police have not disclosed details about the suspects other than confirming one was killed at the scene, one was wounded and hospitalized and the third was arrested.
The department said it planned to conduct a "long and exhaustive" investigation over the next few days and is asking anyone with knowledge about the shootout to come forward.
"We really need your help. If people do not come forward, then it empowers people who are willing to do these kinds of acts of senseless violence," McDonnell said. "We need to take a stand as residents of Los Angeles County [to show] that we won’t tolerate this."
Copyright © 2018, ABC Radio. All rights reserved.