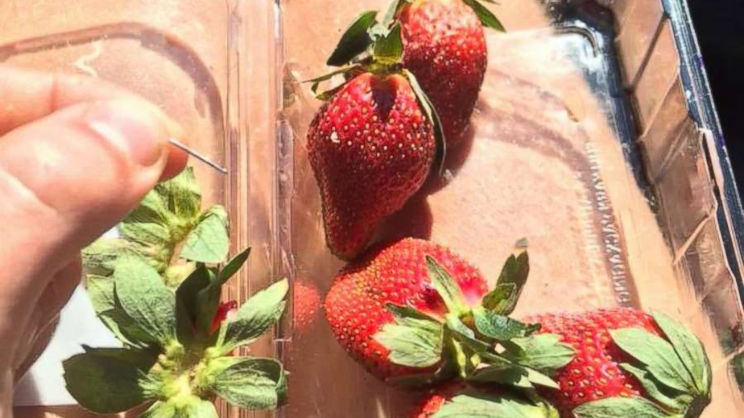 Joshua Gane via Storyful
Posted on September 19, 2018 by ABC News

Joshua Gane via Storyful(NEW YORK) — A young boy has been arrested for putting sewing needles inside strawberries in New South Wales, Australia.
The boy, whose name has not been disclosed because of his age, confessed to putting the sewing needles in strawberries as a prank and is not believed to be the culprit behind other fruit contaminations in the region, New South Wales police authorities told ABC News.
"What we’ve seen in this state we believe is the work of copycats and pranksters," Stuart Smith, the acting assistant commissioner of the New South Wales police, said in a press conference Wednesday.
The boy is the first person to be arrested since people reported finding sewing needles inside strawberries across Queensland, New South Wales, Tasmania and South Australia last week.
The New South Wales Police Force said in a press release Tuesday that they have received more than 20 reports of contaminated strawberries alone. Contamination of apples and bananas has also been reported, police said in the statement.
Smith said that people deliberately contaminating food can face up to 10 years in prison.
Smith also announced a $100,000 reward for information leading to the prosecution of any individual who contaminates a food source in the area.
"Whether it's done with the intention of prank, whether it's done with the intention of serious harm to another individual, it's no difference," Smith said Wednesday. "They are going to be charged with that offense and they are going to find themselves in front of a court."