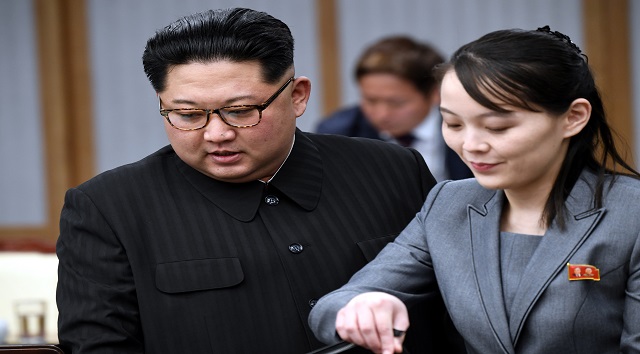 Korea Summit Press Pool/Getty Images(PYONGYANG, North Korea) — Behind the scenes of Pyongyang’s grand welcome ceremony for a South Korean delegation Tuesday was the mysterious Kim Yo Jong, the sister of North Korea's leader Kim Jong Un.
Kim Yo Jong was the watch commander of the greeting event, caught on camera running around the red-carpeted airstrip in Sunan International Airport making sure everyone knew their path. Sitting beside Kim Jong Un during the first round of inter-Korean talks in the three-day summit, she made her presence known as his trusted confidante.
Widely known as Kim Jong Un’s younger sister, Kim Yo Jong was appointed the first vice department director of the central committee of the Workers' Party of Korea this February. Before that, she was named vice director of the Workers' Party's Propaganda and Agitation Department, according to CNN.
Kim Yo Jong roamed around Tuesday's events in a black two-piece suit, stealing the show on the live broadcast screen in Seoul's press center for inter-Korean summit. Nearly 3,000 journalists watched her giving directions to South Korean President Moon Jae-in himself as the two Korean leaders stood on stage facing North Korean honor guards. She stood only a few steps behind the first couples, closely engaged the whole time.
"Kim Yo Jong is practically Kim Jong Un's political partner and right hand," Han-Bum Cho, senior research fellow at the Korea Institute for National Unification, told ABC News. "She takes the role of his political comrade by being the chief secretary, chief presidential secretary and policy director She is the only person that Kim trusts."
Kim Yo Jong first caught the public's attention as part of North Korea's delegation to the Pyeongchang Winter Olympics in February, and as the North Korean leader’s special envoy to deliver his letter to Moon.
Since then she has been part of every landmark moment in inter-Korean relations. Not only did she attend the first inter-Korean summit in April at the border village of Panmunjom, she also played her role as Kim Jong Un's shadow during the historic U.S.-DPRK summit in Singapore in June.
"Kim Yo Jong is an authority figure," Philo Kim, an associate professor at the Institute for Peace and Unification Studies at Seoul National University, told ABC News. "She is the one who can speak frankly to North Korean leader Kim Jong Un, not only as a high official of North Korea’s ruling party, but also as a family member."
Standing by her brother's side as he and Moon signed a denuclearization agreement Wednesday, Kim Jong Un would only use the pen Kim Yo Jong handed him to sign the joint statements.
Kim Yo Jong shares with Kim Jong Un the Baektu bloodline that flows from late North Korean leader Kim Il Sung, which they say legitimizes the Kim dynasty’s regime. They both have the same mother, Ko Yong Hui.
While Kim Jong Un said Wednesday he plans to visit Seoul, his sister was the first member of the Kim family dynasty to step foot on South Korean soil when she arrived ahead of the Olympics.
She is also known to have accompanied the North Korean leader in his overseas studies in Switzerland.
During Tuesday's two-hour closed-door meeting with Moon, the golden sister sat to the left of Kim Jong Un, proving her position as an influential figure in the Worker’s Party of Korea.
On the right was Kim Yong Chol, the vice chairman of the Central Committee of the Worker's Party of North Korea, who has kept his spot during every important summit talk Kim Jong Un has held. He also visited the White House earlier this year as the U.S. and North Korea prepared for June's historic summit. Moon sat with Chung Eui-yong, South Korea's top security adviser, and National Intelligence Chief Suh Hoon.