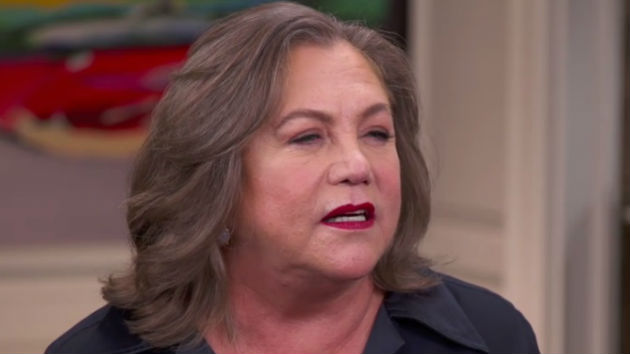 ABC(NEW YORK) — In an interview with ABC News' Juju Chang, legendary actress Kathleen Turner opened up about being a sex symbol and aging in Hollywood, saying her body is "not Body Heat anymore, and get over it."
Turner, 64, skyrocketed to fame as the seductress in that 1981 film, becoming a household name who was instantly recognizable for her deep, husky voice that continues to be one of her trademarks. Her signature voice also is the one immortalized for the ultra-seductive, animated character of Jessica Rabbit in 1988's Who Framed Roger Rabbit, which she voiced while pregnant.
"The day my water broke, I was recording Jessica Rabbit," Turner quipped. That's one story you'll find in Turner's new book, called Kathleen Turner on Acting: Conversations about Film, Television, and Theater.
Reflecting back on her decades-long career in Hollywood, Turner said one of her favorite moments was filming the 1984 hit romantic comedy Romancing the Stone opposite Michael Douglas. She revealed she "almost" had an affair with him then.

"I thought we were falling madly in love…he was separated from his first wife, and I was unattached," said Turner. "But then Diandra, his wife, flew down to Mexico and made it clear that they were…still married."
Turner even said there was a competition among some of her former co-stars, including Jack Nicholson, Douglas, and Warren Beatty, to see "who could get me first."
"I was the new trophy in town," she said, adding, "That was never going to happen."
In the mid-'90s, Turner's movie career stalled when she was diagnosed with rheumatoid arthritis, and she ended up abusing alcohol to cope with the pain. Now sober, Turner has developed a thriving stage career and works on the occasional movie project.

Shaq names his ideal ‘Big 3,’ talks new ad, NBA predictions
Viola Davis talks Chadwick Boseman, playing Michelle Obama
US, Canada to hold climate talks, paving road to Biden’s Earth Day summit
And Just Like That… Chris Noth hints Mr. Big could be heading to the ‘Sex and the City’ reboot
‘And Just Like That…’ Mr. Big will not appear in ‘Sex and the City’ reboot
Catastrophic outages in Texas a symptom of America’s aging power grids