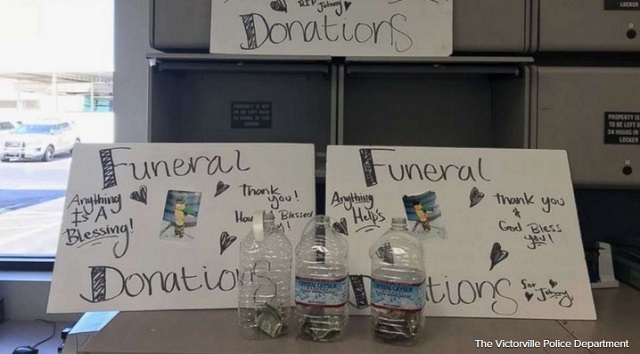 Victorville Police Department(SAN BERNADINO, Calif.) — Police in Southern California arrested a 20-year-old man and two teenage boys this week after they allegedly scammed people in a fake funeral scheme.
Richard Navarrete, of San Bernardino, California, and two unidentified 14-year-olds were taken into custody on Monday after they allegedly accepted cash donations for the funeral of a young boy who they falsely claimed had died, authorities said.
The suspects were allegedly accepting donations near a highway in Victorville, California, just north of San Bernardino, when a police officer initiated a “pedestrian check” and launched an investigation, the San Bernardino County Sheriff-Coroner Department said in a statement.
Officers said they had water bottles with cash donations inside and were holding handwritten signs that read: "Funeral Donations," "Anything is a blessing" and "RIP Johnny," police said in a statement.
Authorities have released photographs from their investigation because “it is believed other victims exist,” the statement said.
“Through investigation, deputies discovered the boy was not deceased and was in fact the son of Navarrete’s friend,” the department said in a statement. “Each of the subjects had water bottles containing money that had been donated as a result of the fraudulent signs.”
Police interviewed one of the alleged victims near the scene and are searching for others who may have fallen victim to the scam, according to the statement.
The suspects are facing charges of theft by false pretenses, the department said. It’s unclear if they have obtained attorneys.
Copyright © 2018, ABC Radio. All rights reserved.