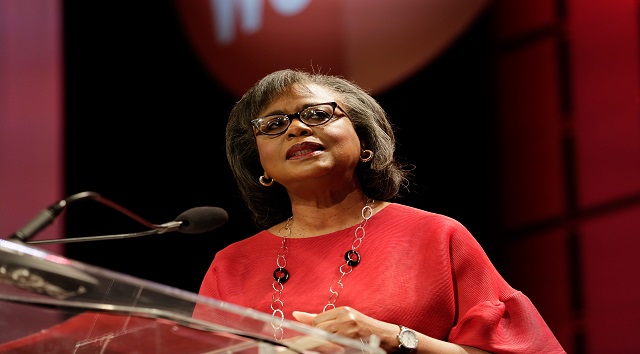 Marla Aufmuth/Getty Images for Texas Conference for Women(WASHINGTON) — Nearly three decades after Anita Hill testified about her own sexual harassment allegations against now-Supreme Court Justice Clarence Thomas, she says the Senate Judiciary Committee should "push the pause button" on high court nominee Brett Kavanaugh.
"My advice is to push the pause button on this hearing, get the information together, bring in the experts and put together a hearing that is fair, that is impartial, that is not biased by politics or by myth and bring this information to the American public," she said.
Hill said whether Christine Blasey Ford testifies is not about whether conditions are ideal, but if they are even reasonable.
"We're talking about whether the conditions are actually tenable, whether or not it is going to be anything more than just a sham proceeding so that the senators can say we gave her a chance to talk and then move on to doing exactly what they were intending to do before she came forward," she said.
Shortly before his confirmation, Hill accused Thomas of making unwanted advances and lewd remarks when they worked at the Education Department and Equal Employment Opportunity Commission in the 1980s, which he denied.
Hill's 1991 Senate testimony occurred five days after her allegations went public, said at the time she felt the public hearing was meant to deter her from going forward with her testimony 27 years ago. Hill said she sees the same sentiment in how Republican Senators are approaching Ford’s allegation against Kavanaugh but that six days is not enough time for Senators to inform themselves on the situation and consult experts.
"It occurs to me that two things are going on, that either they don't take this seriously, that they aren't concerned about this complaint as many Americans are, or that they just want to get it over. I'm not sure which is in play," she said, adding, "Maybe they're not concerned or maybe they just don't know how to handle this kind of a situation."
Speaking exclusively on "Good Morning America" on Wednesday, Hill told ABC News chief anchor George Stephanopoulos that she backs Ford’s request for an FBI investigation into her allegation that an intoxicated Kavanaugh sexually assaulted her at a high school party 36 years ago, which he has vehemently denied.
“Absolutely, it's the right move,” Hill said of Ford’s request. “The hearing questions need to have a frame and the investigation is the best frame for that. A neutral investigation, that can pull together the facts, create a record, so that the senators can draw on the information they receive to develop their question.”
If the purpose of the hearing is to get to the truth, an investigation is unavoidable, Hill said, though cautioning senators to proceed with the U.S. public in mind.
"The American public really is expecting something more," she told GMA."The American public wants to know about what happened and they want to know that the Senate takes this seriously."
She did not offer direct advice to Ford but said she should be taking advice from her attorney. Hill urged the Senate Judiciary Committee to hold off on going forward with the hearing and take time to put together a fair, impartial hearing.
Hill is a professor of political science and women's, gender and sexuality studies at Brandeis University. She also wrote an opinion piece for The New York Times this week. She wrote that there is no way for the committee to re-do the 1991 hearings, but there is an opportunity to do things better this time around.
She wrote that the lack of process for vetting sexual harassment allegations against a Supreme Court nominee shows that the Judiciary Committee hasn't learned anything from the Thomas hearings or the #MeToo movement.
"To do better, the 2018 Senate Judiciary Committee must demonstrate a clear understanding that sexual violence is a social reality to which elected representatives must respond," she wrote, adding that a hearing should be guided by experts familiar with sexual violence to ensure proceedings are fair and neutral.
She also wrote in the column that Kavanaugh has the "burden of persuasion" in this situation because he is the one seeking a lifetime appointment to the country's highest court.
"It is an honor and a privilege to be nominated and to serve. It is not an entitlement and so a person coming into that position on the supreme court for a lifetime really has to have the full confidence of the American public. We need to be able to believe in the integrity of our courts, and that means believing in the integrity of the individuals who are on it," she said when asked about that comment on GMA.