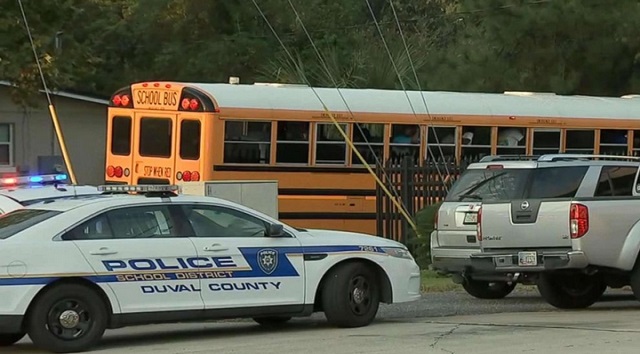 WJXX(JACKSONVILLE, Fla.) — A high school student in Florida was shot on his way to the bus stop Wednesday morning and is now in the hospital undergoing surgery for life-threatening injuries, the Jacksonville Sheriff's Office said.
The 17-year-old boy was walking towards the bus stop around 6:15 a.m. when a black vehicle approached and opened fire on him, hitting him once, the sheriff's department said during a press conference Wednesday.
The student was able to get on the bus and the bus driver brought him to a local hospital, the sheriff's department wrote on Twitter. Authorities said the driver's quick thinking was "very" important and "likely saved his life."
The shooter is still at large and police said they are not aware if the student was able to give a description of the suspect.
School police and the sheriff's office are investigating the incident and the boy's parents are being contacted, ABC affiliate WJXX in Jacksonville reported.
The other 21 students on the bus are also being questioned by police, WJXX reported. During questioning, two of the students were "uncooperative" and one student tried to grab a police officer's taser and was tased, WJXX reported, citing Duval County School Board officials. The tased student was taken to the hospital, according to WJXX, and both "uncooperative" students will be arrested.
In the statement posted on Twitter, the sheriff's department declined to comment further on the "secondary incident" on the bus and said it was not related to the shooting.
The Duval County School Board did not immediately respond to ABC News' request for comment.