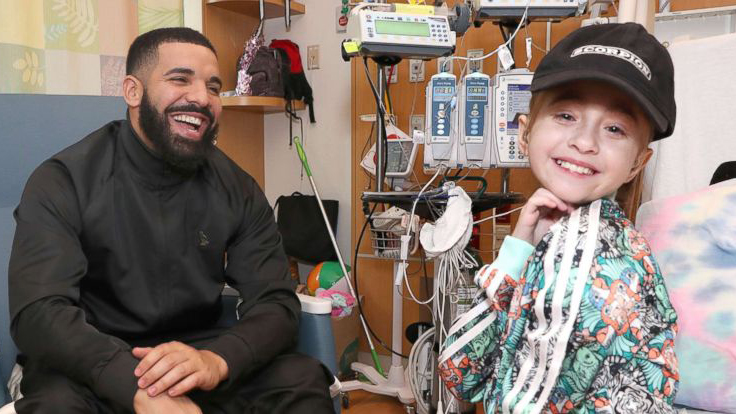 Ann & Robert H. Lurie Children's Hospital of Chicago(CHICAGO) — The 11-year-old girl in desperate need of a new heart who was surprised by Drake last month in a heartwarming viral video spoke out after her successful heart transplant surgery, saying: "I felt more alive."
"It’s so much better than my other heart," Sofia Sanchez, 11, said in an interview Wednesday with ABC News of her new heart, just weeks after her transplant surgery.
Sofia, who was diagnosed with heart disease cardiomyopathy, was admitted to Lurie Children’s Hospital in Chicago in June.
She recounted her first reaction after finding out she was getting a new heart: "I was like, 'Bye-bye cardiomyopathy heart.'”
She had open-heart surgery in July to connect a ventricular assist device, a mechanical pump that the hospital said served as a "bridge" to her eventual transplant.
Sofia filmed a video before her 11th birthday in August asking for two presents: a visit from "In My Feelings" singer Drake and a new heart.
Less than one week after Sofia’s “Kiki Challenge” dance video — featuring her still hooked to an IV — went viral, Drake visited her at the hospital.
Sofia told ABC News Wednesday that she and Drake "got along pretty well."
The international music star even gave her his personal cell phone number, which she "pinky-promised" she wouldn't give away to anyone else.
Nearly one week after meeting Drake, Sofia learned a donor heart was available. She underwent the nine-hour heart transplant on Aug. 27.
After waiting 48 days for a new heart and undergoing the successful transplant, Sofia was discharged from the hospital on Sept. 12.
She has spent the past week continuing to recover at the Ronald McDonald House near Lurie Children’s.
While Sofia said she is enjoying playing sports and doing things she couldn't do with her old heart, she still urged others not to forget the many other children who may still be waiting for a life-saving organ donation.
"There’s a lot of kids that are waiting for a transplant," she said. "And it's important for everybody to be a donor."
Sofia's mom, Natalie Sanchez, said that after her daughter got the new heart, "Every day gets better and better."
"She has a second chance at life, and it's amazing," she said, adding they are incredibly "grateful" for the "donor and his family."

On ‘GMA’, embattled ‘Bachelor’ host Chris Harrison speaks out: “This franchise can be a beacon of change”
Michelle Obama speaks out about Biden inauguration, kids’ edition of “Becoming”
Lawyer for family of girl injured in pre-Super Bowl crash speaks out: ABC News exclusive
Plant-based diets reduce risk of heart disease, dementia, study finds
Mariska Hargitay says it was “life-changing” when she met ‘SVU’ co star Chris Meloni for the first time
Woman trapped for 10 hours under collapsed backyard awning in frigid weather lucky to be alive