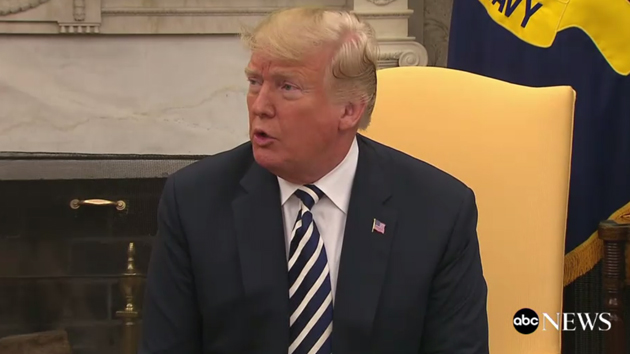 ABCNews.com(WASHINGTON) — President Donald Trump on Tuesday said the allegation against his embattled Supreme Court nominee Brett Kavanaugh should go through a process.
There “there shouldn't even be a little doubt,” Trump said of the process.
“Hopefully the woman will come forward, state her case,” Trump said Tuesday. “He will state his case before representatives of the United States Senate. And then they will vote, they will look at his career, they will look at what she had to say from 36 years ago, and we will see what happens.”
And as he did earlier in the day, Trump said he didn't think the FBI should be involved, despite Democrats' insistence that, before any public hearing with the nominee and his accuser, the FBI should look into an allegation made by professor Christine Blasey Ford, 51, that Kavanaugh sexually assaulted her when they were both in high school decades ago in suburban Maryland.
Kavanaugh, who was back at the White House on Tuesday for the second day in a row, has repeatedly denied the alleged encounter ever happened.
The president said he has not personally spoken with Kavanaugh since the allegation surfaced, saying “specifically I thought it would be a good thing not to.”
Trump pointed out that Kavanaugh has had multiple background checks throughout his career and called his history "impeccable."
"I feel so badly for him that he is going through this," Trump said during a press conference on Tuesday afternoon with Polish President Andrzej Duda.
The sexual assault allegation became public after the contents of a letter Ford sent to California Sen. Dianne Feinstein, a member of the Senate Judiciary Committee, were disclosed to several media outlets.
Asked if he believes the allegation is political in nature, the president said: “I don't want to say that. Maybe I will say that in a couple of days, but not now,” Trump said earlier on Tuesday.
Trump, however, attacked Democrats for “holding” onto the allegation, saying it was “a terrible thing that took place” when the story surfaced over the weekend.
“It's a terrible thing that took place and it's frankly a terrible thing that this information was not given to us months ago when they got it,” Trump said.
Meanwhile, Senate Majority Leader Mitch McConnell is pushing ahead with plans to hear testimony from Kavanaugh and Ford on Monday.
This, despite the numerous calls from Democrats to slow down the process and allow the FBI to re-open its background investigation into Kavanaugh so that they can determine the facts of what happened to Ford in high school, when she alleges Kavanaugh forced himself on her.
"She's been asking for the opportunity to be heard and she's being given the opportunity to be heard on Monday," McConnell told reporters.
"She could do it privately if she prefers or publicly if she prefers. Monday is her opportunity," he said.
Democrats have been writing to White House Counsel Don McGahn and to Judiciary Chairman Chuck Grassley to request the FBI re-open its investigation into Kavanaugh but to no avail.
Democrats are also crying foul over Grassley's decision to not allow other witnesses besides Kavanaugh and Ford to testify.
Grassley has said Ford has still not accepted his invitation to appear before the Judiciary Committee on Monday.
However, McConnell and GOP leadership are forging ahead with the hearing.
"There have been multiple investigations. Judge Kavanaugh has been through six investigations in the course of his lengthy public career. We want to give the accuser the opportunity to be heard and that opportunity will occur next Monday," McConnell reiterated.
"I think that gives her ample opportunity to express her point of view and Judge Kavanaugh of course has been anxious for days to discuss the matter as well," McConnell said.
This is a developing story. Please refresh for details.