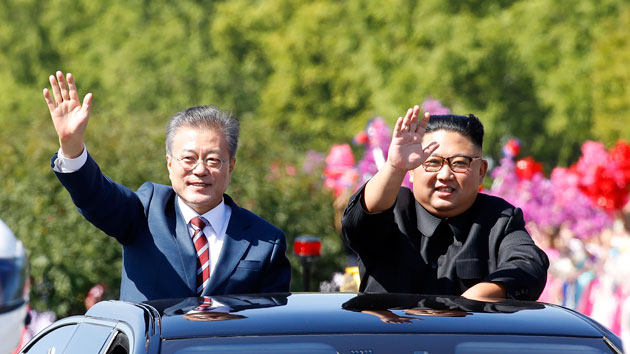 Pyeongyang Press Corps/Getty Images(PYONGYANG, North Korea) — North Korean leader Kim Jong Un greeted South Korean President Moon Jae-in with a lavish welcome ceremony Tuesday at Sunan International Airport in Pyongyang, North Korea, as the two leaders kicked off their third summit this year.
Kim and his wife, Ri Sol Ju, hugged the first couple from the South at the red-carpeted airfield as a crowd of thousands lined up to cheer for them — some holding national flags, some holding unified-peninsula flags and some holding colorful plastic bouquets.
North Korea's ceremonial guards honored the South's delegation. Kim's influential sister, Kim Yo Jong, first vice department director of the central committee of the Workers' Party of Korea, also was on hand to escort the visitors.
Moon flew to Pyongyang Tuesday for the third inter-Korean summit with Kim.
The South Korean delegation, which was about 200 people from all walks of life, including businessmen and musicians, landed around 10 a.m. local time.
Moon and Kim rode in a lavish parade, standing together and waving to the crowd from an open-top black Mercedes limousine. Tens of thousands of citizens dressed in colorful national costumes and waving flags and paper-flower bouquets lined up in the streets chanting “Unification!”
The two leaders arrived at the Baekhwawon guesthouse, had separate luncheons, and then began the first of a three-day summit talk.
“You traveled to best places around the world but our accommodation is plain compared to developed countries,” Kim told Moon just before going into closed-door meetings. “Though our standards may be low, I hope you understand our efforts with full heart that we did our best to prepare the best accommodation and schedule [for this trip].”
A priority on the agenda is to ease military tensions on the Korean Peninsula, Im Jong-seok, the South Korean presidential office's chief of staff, said at a press conference Monday. The two leaders will spend considerable time reviewing in detail the progress of their joint agreement made in April and then draw up a "concrete and practical" agreement.
Moon also will focus on bridging the gap between Kim and U.S. President Donald Trump regarding denuclearization. So far, the U.S. wants concrete steps by the North to prove denuclearization, for example, a "list" of nuclear facilities. On the other hand, North Korea wants a regime-security guarantee that includes declaring the Korean War over and signing a non-aggression peace treaty.
It's "difficult to have an optimistic outlook" on the progress of denuclearization, although it will depend on the honest conversations between Moon and Kim to reach such an agreement, Im said.
Copyright © 2018, ABC Radio. All rights reserved.