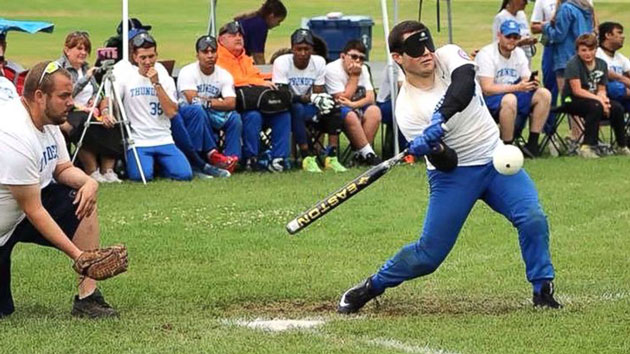 Indy Thunder(NEW YORK) — The familiar orange and black script on the Orioles' uniform will be replaced Tuesday night with Braille to honor the National Federation of the Blind, and for one visually impaired ball player, the night is about recognizing people like him.
"They're acknowledging that you're there," Erik Rodriguez, 18, told ABC News' Start Here podcast. "Sometimes that's the biggest step."
Rodriguez is a shortstop for the Indy Thunder in beep baseball, a modified version of the game which uses sound and beeping bases to guide visually impaired players. He was born with Stickler syndrome and glaucoma, which weakened his eyes over the years and led to retina detachments.
While his vision declined, his passion for baseball never did. At 10 years old, he was introduced to beep ball and "immediately fell in love."
"It's changed my life," he said. "It's given me a platform where I can still perform on an elite level, where I can still consider myself a champion, where I can still have that team bonding that you really can't get in individual sports."
Rodriguez led the Indy Thunder to their third straight World Series championship as one of the captains this past season. It was his sixth season in beep baseball, but he told "Start Here" he only recently began to consider himself a "good hitter."
"It's kind of like target practice for the pitcher and the batter," he said. "It's a lot more complicated than people realize, so it takes a lot of good teamwork and trust."
The pitcher is trying to get the batter a hit instead of striking them out, so when the pitcher says, "Set, ready, pitch," they tailor their pitch depending on who they're throwing to. The batter then needs to keep their swing consistent to make sure they're close to the ball every time.
"It just takes a lot of practice and reps," Rodriguez explained. "It does not happen overnight."
Rodriguez told "Start Here" he loves following the Chicago Cubs and the New York Yankees, but the Orioles have earned the beep ball player as a fan for their National Federation of the Blind Night.
"The fact that such a big organization like Baltimore is wanting to do something like that for the blind community … it makes you feel good, it makes you feel like they care and they want to help make a difference for the young people and the older people that are suffering from this disability."
Copyright © 2018, ABC Radio. All rights reserved.