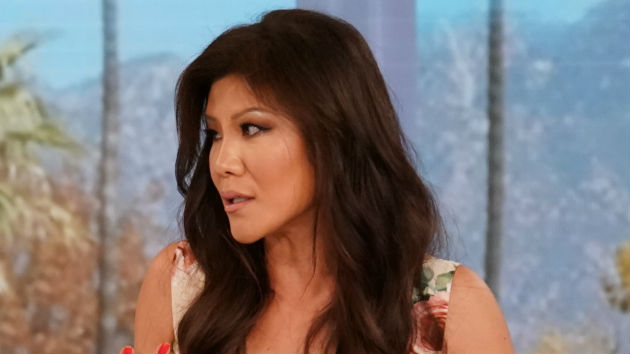 Monty Brinton/CBS ©2018 CBS Broadcasting, Inc. All Rights Reserved(LOS ANGELES) — Julie Chen will reportedly be stepping down as co-host of The Talk just a week after her husband Les Moonves was ousted as CBS' CEO amid sexual harassment allegations, The Hollywood Reporter has confirmed.

Chen's decision is effective immediately, and she is expected to say goodbye to the morning show's viewers via videotaped message Tuesday.

Chen has been a no show on the The Talk since her husband left the network last week. She did, however, return to host Big Brother Thursday evening and signed off by saying, "I'm Julie Chen Moonves." She is expected to continue to host CBS' Big Brother.

She has defended her husband since the accusations from another group of six more women; these new accusations of sexual harassment were made in a follow-up article by Ronan Farrow published in The New Yorker.

The TV personality had called Moonves a "good man, a loving father" and a "kind, decent, and moral human being," adding on her chat show that she "stands by that statement today, tomorrow, forever."

Moonves has continued to deny all allegations.

Vivek Murthy to talk about his own family lost to the pandemic in nomination hearing
Katharine McPhee welcomes first child with husband David Foster
This is us 3: Mandy Moore welcomes 1st child with husband Taylor Goldsmith
Rush Limbaugh, controversial conservative talk show host, has died
Mandy Moore says she was shut out of an interview because she refused to talk about her abuser
Shia LaBeouf checks into rehab, reportedly parts ways with talent agency