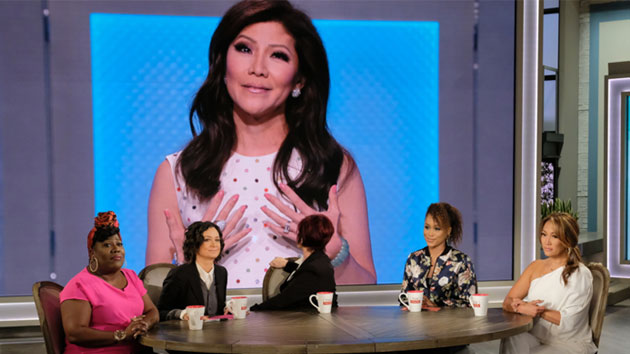 Julie Chen says goodbye on "The Talk”; Johnny Vy/CBS(NEW YORK) — Julie Chen announced Tuesday that she's leaving The Talk, just over a week after her husband and former CBS Chairman Les Moonves left the network amid new allegations of sexual misconduct and assault.

Chen, who's been absent from the CBS daytime chat show of late, shared the news via a recorded message at the end of Tuesday's show.

"I have been at The Talk since the day it started," Chen said in part. "But right now I need to spend more time at home with my husband and our young son."

Chen then took time to thank her The Talk co-hosts individually: Eve, Sheryl Underwood, Sara Gilbert and Sharon Osborne. She even suggested guest host and Dancing with the Stars judgeCarrie Ann Inaba would be a good replacement for her.

The co-hosts had tears in their eyes as Gilbert thanked Chen right back, adding, "We love you, Julie."

Chen's bombshell comes just nine days after CBS confirmed the network and Moonves were parting ways, though he denies allegations of sexual misconduct from a dozen women.

"Untrue allegations from decades ago are now being made against me that are not consistent with who I am," Moonves said in a statement announcing his departure. "I am deeply saddened to be leaving the company. I wish nothing but the best for the organization.”

Chen, who had been with The Talk since its debut, released a statement of her own in late July after the first allegations against her husband came to light.

"Leslie is a good man and a loving father, devoted husband and inspiring corporate leader," she wrote. "He's always been a kind, decent and moral human being. I fully support my husband and stand behind him."

Mother-daughter duos talk simultaneous breast cancer battles: ‘We lift each other’
Teyana Taylor reveals benefits of being away from husband as he competes on ‘Dancing with the Stars’
Ciara celebrates 36th birthday with husband Russell Wilson at the top of Seattle’s Space Needle
Hilaria Baldwin posts about “tragic incident” that left cinematographer dead on husband Alec Baldwin’s film
Husband charged in Maya Millete’s killing, pleads not guilty in court
Taraji P. Henson opens up about leaving an abusive relationship to protect her son