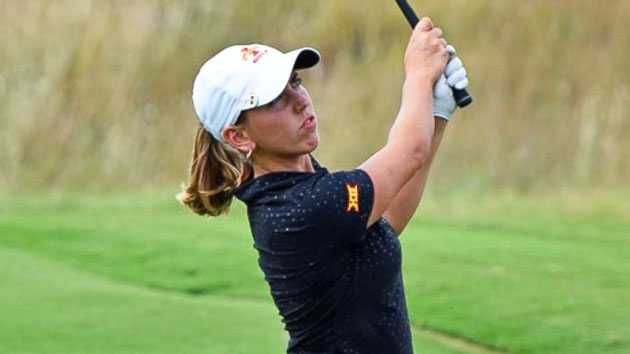 Iowa State Department of Athletics(AMES, Iowa) — Police charged a man with murder just hours after promising young golfer Celia Barquin Arozamena was found dead on a golf course in Iowa.
Collin Daniel Richards, 22, was charged with first-degree murder in the Iowa State University golfer’s death Monday night after police found her body at Coldwater Links golf course in Ames, Iowa.
Barquin Arozamena, 22, a native of Spain, was recently named Iowa State’s female athlete of the year.
The Ames Police Department opened a suspicious death investigation on Monday morning when golfers found a golf bag “with no one around it on the course,” according to a police statement.
Officers responded and located Barquin's body "some distance away" and determined she had been assaulted, the department said.
Several law enforcement agencies, including the Iowa State University Police Department, assisted in the investigation.
"This is a tragic and senseless loss of a talented young woman and an acclaimed student athlete," Iowa State University President Wendy Wintersteen said in a statement Monday. "We mourn with her family and friends in Spain, her teammates here and all who knew her.”
Barquin Arozamena claimed the 2018 Big 12 Championship with a three-shot victory in April, according to the university, which called her one of the most accomplished golfers in the school’s history. She was finishing her civil engineering degree this semester.
"Celia had an infectious smile, a bubbly personality and anyone fortunate enough to know her was blessed," Iowa State Director of Athletics Jamie Pollard said. "Our Cyclone family mourns the tragic loss of Celia, a spectacular student-athlete and ISU ambassador."
Barquin Arozamena qualified for the U.S. Women's Open in Alabama this summer, one of the LPGA Tour's majors, but did not make the cut after the first two rounds.
The university’s Athletics Department said it plans to honor her memory at a football game on Saturday. Funeral arrangements are pending.
"I'm just kind of surprised," ISU freshman Isaac Sachse told Iowa ABC affiliate WOI.
"First it was the kidnapping and now this, it's kind of horrifying," he added, referring to the death of University of Iowa student Mollie Tibbetts earlier this summer.
Officials with the Ames Police Department did not release many details about the suspect and authorities could not locate a “known address” for him. Richards has a long rap sheet, according to court records. He’s pleaded guilty to charges of domestic abuse, assault, theft and public intoxication in the past, the records show.
The department did not say how it connected Richards to the case and a cause of death has not been determined.
Copyright © 2018, ABC Radio. All rights reserved.