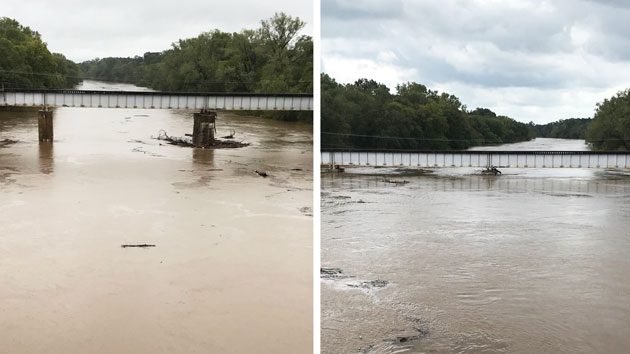 @FayettevillePD/Twitter(NEW YORK) — Florence, which made landfall as a hurricane Friday, dropped about 8.04 trillion gallons of rain on North Carolina, the National Weather Service said Tuesday, citing "the unofficial, radar-estimated storm total rainfall."
At least 32 people are dead, including several young children, as a result of the storm, which brought unprecedented rainfall and flooding to North and South Carolina.
North Carolina's governor on Monday called Florence an "epic storm" and warned that some parts of his state "have not seen the worst flooding yet."
"This remains a significant disaster," North Carolina Gov. Roy Cooper said at a news conference. "The next few days will be long ones as the flooding continues."
First responders have rescued and evacuated more than 2,600 people as of Monday.
"We, the people of North Carolina, will get through this," Cooper said.
Copyright © 2018, ABC Radio. All rights reserved.

#MeToo, Time’s Up and National Women’s Law Center launch campaign for Black survivors of sexual violence
Alex Morgan scores first goal for US Women’s National Team since giving birth to daughter
Stormy weather pattern on the way for the West and the South
Tanker trucks, National Guard dispatched to Jackson, Mississippi, water crisis
Spring-like weather across much of US, possible heavy snow in Rockies and parts of West
Ancient dog bone reveals when man’s best friend migrated to North America