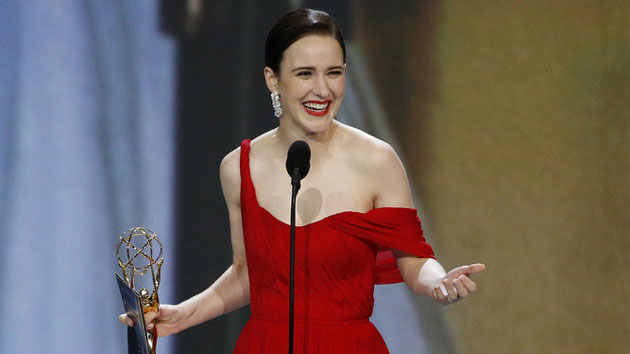 "The Marvelous Mrs. Maisel" star Rachel Brosnahan; Paul Drinkwater/NBC(LOS ANGELES) — The most historical moment at Monday night's 70th annual Primetime Emmy Awards wasn't a shocking win or loss, or a newsworthy comment from a famous actor or actress: It was a good old-fashioned surprise proposal.

After Glenn Weiss won the Emmy for Outstanding Directing for a Variety Special — The Oscars ceremony — he mentioned his recently departed mother and how much she loved Weiss' girlfriend, Jan Svendsen. Then he said, "You wonder why I don’t like to call you my girlfriend? Because I want to call you my wife.”

As the audience went nuts, Svendsen shouted "yes" from the audience, and as she walked up to the stage Weiss joked, "I didn't ask yet!" When she made it there, Weiss pulled out a ring "that my dad put on my mom’s finger 67 years ago," got down on one knee and said, "Jan, I want to put this ring that my mom wore on your finger in front of all these people and in front of my mom and your parents watching from above. Will you marry me?” Of course she said yes, and the two kissed onstage in front of everyone. It was an Emmy first.

Speaking of Emmy firsts, the show was full of first-time winners: Amazon's The Marvelous Mrs. Maisel was named Outstanding Comedy Series its first year out, and its co-star Rachel Brosnahan also won her first Emmy, for Outstanding Actress in a Comedy Series.

The Americans' Matthew Rhys picked up the Outstanding Lead Actor in a Drama award and The Crown's Claire Foy was named Outstanding Actress — it was both actors' first win. Westworld's Thandie Newton, The Assassination of Gianni Versace's Darren Criss, Barry's Bill Hader and The Marvelous Mrs. Maisel Supporting Actress winner Alex Borstein were all first-time winners, as was The Fonz himself, Henry Winkler, for his supporting role in Barry, 42 years after he was first nominated for starring as The Fonz in Happy Days.

Accepting his award, a very pleased Winkler said someone once told him, "If you stay at the table long enough, the chips come to you. And tonight, I got to clear the table!"

When Rhys won, he thanked his co-star and real-life romantic partner Keri Russell, but joked, "She said, 'If you propose to me, I'll punch you clean in the mouth!'"

It would have been another Emmy first had Netflix won the most awards, but the streaming service, which went into the ceremony with the most nominations of any platform, tied with HBO: Each won a total of 23 awards.

HBO's Game of Thrones was the night's biggest winner overall, with nine total trophies, including Outstanding Drama Series and Outstanding Supporting Actor for Peter Dinklage. Netflix's most awarded series was The Crown, which scored five wins.

While the nominees for this year's Emmy Awards were the most diverse ever, the winners themselves weren't particularly diverse. Just three stars of color — Thandie Newton, Regina King and RuPaul — took the stage as winners during Monday night's ceremony, though many more won last weekend at the Creative Artist Emmys, including John Legend, Tiffany Haddish and Katt Williams.

However, the Emmys for Writing and Directing for a Comedy Series were both won by a woman — the same woman, actually: Amy Sherman-Palladino, for The Marvelous Mrs. Maisel, another first.

And while there were a number of #MeToo jokes, surprisingly, the hosts, presenters and winners mostly stayed away from politics, although Rachel Brosnahan urged everyone to register to vote, and there were a few very vague references made to President Donald Trump.