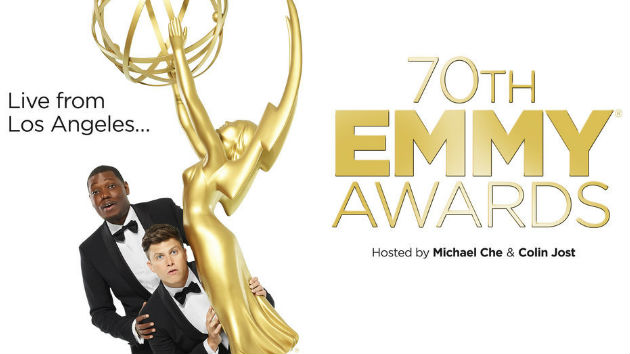 NBCUniversal(LOS ANGELES) — Saturday Night Live Weekend Update anchors Colin Jost and Michael Che hosted Monday night's 70th Annual Primetime Emmy Awards, and you would have been forgiven if you thought you were watching a three-hour-long episode of SNL.

In need of comedic talent to keep the show lively, Jost and Che brought out a cavalcade of SNL stars past and present to help out, including Tina Fey, Will Ferrell, Maya Rudolph, Fred Armisen, Andy Samberg, Leslie Jones, Kate McKinnon and Kenan Thompson. To top it off, Saturday Night Live ended up winning the Emmy for Outstanding Variety Sketch Series.

The show began with McKinnon and Thompson raving about the diversity of this year's nominees, with Thompson declaring, "We solved it!" McKinnon responded, "Seriously? Diversity is not a problem in Hollywood anymore?" "Nope, we solved it!" crowed Kenan. The two then launched into a number called "We Solved It," joined by Sterling K. Brown, Titus Burgess, John Legend, Kristen Bell and Ricky Martin.

"We've gotten with the times/There's room for all our voices, but mostly Shonda Rhimes," went the lyrics. "Welcome Asian people, we gave you that one show/Who can forget the amazing Sandra Oh?"

Referring to the rash of #MeToo firings in Hollywood, Bell sang, "We solved it, banished every creep who broke the law/And now they're serving hard time in that Arizona spa." Then, seemingly referencing Louis CK's return to stand-up, Burgess sang "We solved it/Won't cut them any slack/They've been away nine long months/Now let them all come back."

And Brown poked fun at Hollywood's own echo chamber existence by singing, “This room is so diverse/From Democrat to liberal Democrat!”

When Andy Samberg dropped in and asked, "Is there any room in this song for a straight white guy like me?" the answer was no. But eventually, RuPaul showed up with a telephone. Thompson picked up, listened, and then said, "Oh, we did not solve it? Long way to go? Yeah, O.K."

When Che and Jost finally took the stage, their monologue was pretty much what they do every week on Weekend Update. Here are a few of their better lines:

–"This year the audience is allowed to drink in their seats, because the one thing Hollywood needs right now is people losing their inhibitions at a work function."

–"It is an honor to be here, sharing this night with the many, many talented and creative people in Hollywood who haven't been caught yet."

–"Our network, NBC, has the most nominations of any broadcast network. Which is kind of being like the sexiest person on life support, it's not great."

–Speaking about the cancellations and pickups of shows like Brooklyn Nine-Nine and Last Man Standing: "And Roseanne was canceled by herself, but picked up by white nationalists."

–"Congratulations to Laurie Metcalf…You know how great an actress you have to be to get nominated for Roseanne now? That's like nominating a cop for a BET award — it doesn't happen."

–"This year, Netflix will spend $8 billion on programming….How is Netflix getting all that money? It's like $9 a month and everyone I know is sharing the same account!"

Later in the show, Michael Che had an amusing segment called the Reparation Emmys, where he went around handing out Emmys — stolen from Bill Cosby — to famous black character actors who'd never been recognized, such as Marla Gibbs from The Jeffersons, Jaleel White from Family Matters, Jimmie Walker from Good Times, and Kadeem Hardison from A Different World.