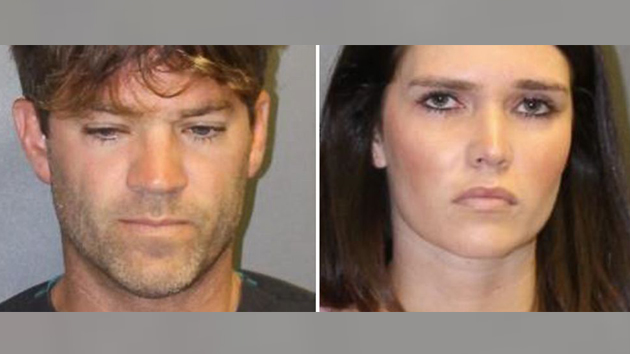 Orange County District Attorney(LOS ANGELES) — An orthopedic surgeon who has appeared on a reality-TV dating show and his purported girlfriend have been accused of drugging and raping at least two women.
Dr. Grant William Robicheaux, who has appeared on the Bravo series "Online Dating Rituals of the American Male," and Cerissa Laura Riley were arrested last week and are facing multiple felony charges in California.
The two alleged victims have contacted investigators, Orange County District Attorney Tony Rackauckas said.
Beyond that, prosecutors have found "thousands" of videos on Robicheaux's phone that are now being examined in which "women in the videos appear to be highly intoxicated beyond the ability to consent or resist," Rackauckas said.
"Based on this evidence, we believe there might be many unidentified victims out there," he added.
Riley is "purported to be" Robicheaux's girlfriend and the pair used "their good looks and charm" to disarm victims, Rackauckas said.
"We've all heard of a wolf dressed up in sheep's clothing but a wolf can wear scrubs or doctors clothing or a wolf can be a beautiful woman," he added.
The pair traveled to festivals like Burning Man in Nevada and events in Palm Springs, California, the District Attorney's office said Tuesday, calling for any possible victims to contact investigators.
"We don't know how many victims there might be out there," Rackauckas said, adding that the Medical Board of California has opened an investigation.
Both Robicheaux, 38, and Riley, 31, are facing felony charges of rape by use of drugs, oral sex using a controlled substance, assault with intent to commit a sexual offense and possession of controlled substances.
Robicheaux is also facing charges relating to possession of an assault weapon and a sentencing enhancement related to that weapon possession, while Riley faces a sentencing enhancement for being knowingly vicariously armed with a firearm.
In one of the two known cases, the pair allegedly met with a woman at a bar in April 2016 and invited her to a boat party in Newport Beach. The pair then took her to Robicheaux's apartment where she was raped, authorities allege.
That victim, identified only as Jane Doe 1, contacted police the next day and tested positive for multiple controlled substances, authorities said.
In October 2016, Jane Doe 2 drank alcohol with the pair until she was "no longer conscious" and then they took her to Robicheaux's apartment where she was sexually assaulted with intent to commit rape, Rackauckas said.
When she allegedly awoke in the apartment, he added, she screamed for help until a neighbor called police.
They were arrested at Robicheaux's residence Sept. 12 and both posted bail for $100,000 each. Robicheaux stands to spend 40 years in prison and Riley faces 30 years and eight months in prison, if convicted. They are slated to appear in court next month. ABC News is attempting to reach them for comment.
"People often assume that rapists are creepy, scary men who lunge out from hiding amongst bushes and attack unsuspecting women,” Rackauckas said. “The reality is that rapists come in all socioeconomic groups, of any background.”