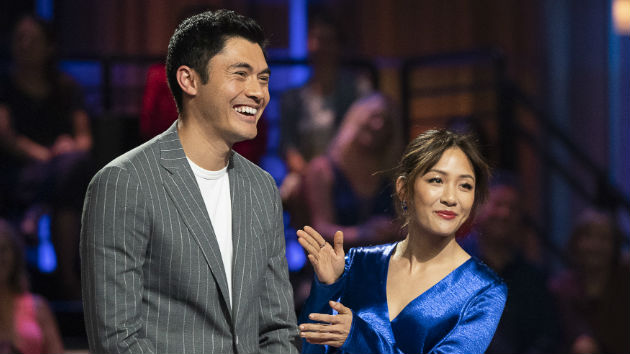 Henry Golding, Constance Wu – ABC/Paul Hebert(NEW YORK) — Henry Golding landed two starring roles for his first two films ever — in the mega box office hit Crazy Rich Asians and the just-released thriller A Simple Favor — but don’t think the newfound fame and "heartthrob" status are going to his head. Not if his wife has anything to do with it!

“Oh man she doesn’t stop teasing me about it,” he says of his wife of two years, Liv Lo. “Whenever she sees me on my phone, she’s like, ‘Oh you’re still checking to see if you’re still famous?’”

He adds that she’s been nothing but supportive with his whirlwind schedule these days.

“She doesn’t have a classic 9-to-5 either so she understands the need to have a very sporadic schedule,” he says. “So it’s a learning process for both of us, but I think we’re gonna enjoy the ride, we’re gonna see where this leads.”

While in real life his marriage is #relationshipgoals, his marriage in A Simple Favor is another story. He plays professor Sean Townsend, the husband to Blake Lively’s volatile Emily. When Emily goes missing, Sean strikes up a relationship with her best friend Stephanie, played by Anna Kendrick.

“Is he a bad guy? Is he a good guy? You don’t know,” he says of Sean. “So for me that was wonderful to play that, like a mysterious kind of Cary Grant in Suspicion. Not really knowing did he do it, didn’t he do it, what’s he done? So, yeah, it was great.”

A Simple Favor is in theaters now.

‘Raya and the Last Dragon’ star Kelly Marie Tran says seeing its diverse cast in animated form was “really special”
NFL star Aaron Rodgers says ‘being a father’ is his ‘next great challenge’
Food industry professionals raise $50,000 on Clubhouse to ‘Stop Asian Hate’ and support restaurants
Regé-Jean Page to star alongside Chris Evans and Ryan Gosling in new movie
‘Degrassi: The Next Generation’ star Jahmil French dead at 29
‘iCarly’ star Jennette McCurdy quits acting: “I resent my career in a lot of ways”