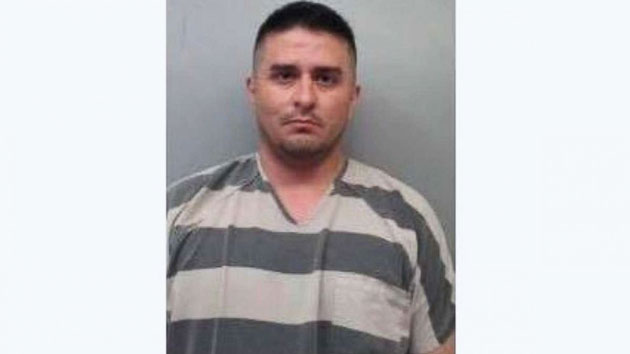 Webb County Sheriffs Office(WEBB COUNTY, Texas) — An arrest warrant for a suspected serial killer reveals new details of how a Texas woman managed to fight off a Border Patrol agent who allegedly killed four women.
Police in Webb County, Texas, credited a woman who escaped from Juan David Ortiz, a U.S. Border Patrol supervisor, for his arrest.
Ortiz, 35, was found hiding in a hotel parking lot on Saturday after the woman escaped and told police that he pulled a gun on her. Ortiz, a 10-year veteran of the agency, was arrested after a brief foot chase and told police that he shot and killed four sex workers in the past two weeks, police said.
The suspect allegedly picked up each of the victims, shot them in the head and dumped their bodies, according to police. Two of the killings occurred early Saturday morning, just hours before his arrest, police said.
"We do consider this to be a serial killer," Webb County District Attorney Isidro Alaniz said Saturday. "It meets the qualifications or definition of being a serial killer — in this case we have four people murdered."
The woman who escaped said Ortiz picked her up in a white pickup truck and took her to his home, according to an affidavit. She said she began feeling uneasy when they began discussing the death of her friend, a fellow sex worker who was recently found dead.
After leaving his home, the two stopped at a gas station where Ortiz allegedly pulled a gun on her and grabbed her by her shirt, according to the affidavit. She screamed for help and tried to fight him off, police said.
She said Ortiz eventually ripped her shirt off, allowing her to break free and run to a police car that happened to be nearby, according to the affidavit. She described the suspect and told police where he lived, according to the affidavit.
Ortiz was arrested at around 2 a.m. Saturday, after a brief foot chase, when police found him hiding in a truck at a hotel parking garage, authorities said.
Authorities have not released a motive in the case.
The U.S. Border Patrol said it was cooperating with the investigation.
"Our sincerest condolences go out to the victims' family and friends," the U.S. Border Patrol said in a statement. "While it is CBP policy to not comment on the details of an ongoing investigation, criminal action by our employees is not, and will not be tolerated."
Ortiz was charged with four counts of first-degree murder, one count of aggravated assault and one count of unlawful restraint, court records show. He was being held on a $2.5 million bond at Webb County Jail in Laredo, Texas. It was not clear if he had obtained an attorney.