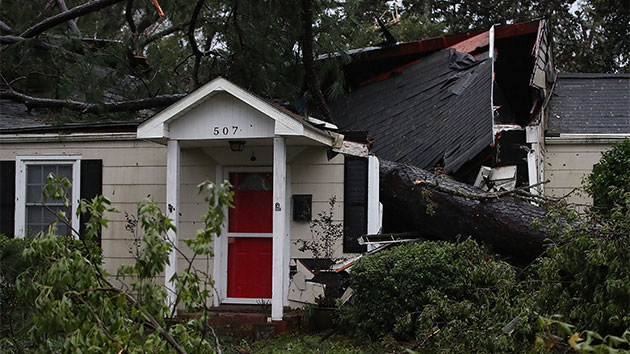 Mark Wilson/Getty Images(WASHINGTON) — As Florence continues to move through the Carolinas, the head of the U.S. Coast Guard said the slow moving nature of the storm is exacerbating flooding worries.

"My biggest concern is the rising water…The storm is moving very slow,” Adm. Karl Schultz said in an interview on "This Week." "It’s southwest of Florence, South Carolina. It’s going to be in the state another, you know, good part of 24 hours before it moves out up through the Ohio Valley. So we’re looking at a high — high water situation."

President Trump declared a state of emergency in South Carolina on Monday ahead of the storm, which moved into the state late Friday. In North Carolina, the president approved a major disaster declaration on Saturday, which allows for more federal funding and coordination in the state. Florence is now classified as a tropical depression.

The federal government has said that that aid is flowing into North Carolina, and the number of federal employees assisting with recovery totals in the thousands.

Michael Sprayberry, the director of emergency management for North Carolina, said this morning in another interview on "This Week" that the situation in his state is "bad right now and we do expect it to get worse over the coming days."

"You've witnessed a lot of major storms, a lot of big hurricanes in North Carolina. How does this one compare?" asked Chief White House Correspondent Jonathan Karl.

"I would tell you that this is one that’s for the record books. We’ve had unprecedented rainfall… We’ve also had some extreme coastal storm surge… and we had some pretty high winds," Sprayberry said. "I will tell you that the winds ended not — thankfully not being as high as expected. But we had that triple threat. There’s going to be a lot of damages…we have a lot of work cut out for us."

In a statement to ABC News, the U.S. Coast Guard said that its helicopter teams have rescued 57 people so far, and that more than 3,000 Coast Guard members are involved in the emergency effort.

Schultz said that Trump is staying up to date on the federal emergency management efforts.

"The president is completely leaning in," Schultz said. "Anything the feds need to do to support the locals, the state partners here in South Carolina, North Carolina. We feel fully supported."

ABC News has confirmed at least 14 deaths as a result of the storm.

President Trump took heat this week from both sides of the aisle after he called into question George Washington University Milken School of Public Health’s report that found 2,975 people had died in Puerto Rico in the aftermath of Hurricane Maria. The study was commissioned by the government of Puerto Rico, which has accepted its findings.

"I’m not calling any numbers into doubt," Schultz said on the question of the death toll in Puerto Rico. "As our team was part of it, we were very much supported, and empowered to get down there and try to be helpful."

"I saw what I saw and I know the fed efforts that I saw were very much committed to the — to the citizens of the commonwealth of Puerto Rico," said Schultz