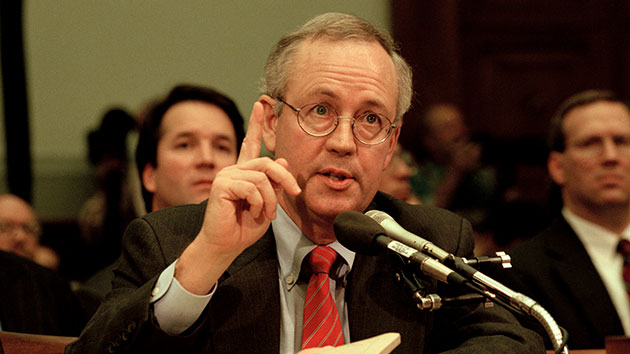 David Hume Kennerly/Getty Images(NEW YORK) — Former independent counsel Ken Starr, who led federal investigations of President Clinton, said special counsel Robert Mueller's striking a deal to win the cooperation of former Trump campaign chairman Paul Manafort is a "very significant breakthrough" and “really good for the country."
Starr told ABC News Chief White House Correspondent Jonathan Karl on This Week Sunday, “It is very likely that Paul Manafort has indicated through his counsel and directly that he can provide very helpful information — useful information — to get to the bottom of what Bob Mueller and his team have been charged to do. So it is a very significant breakthrough.”
"And so it’s all the more helpful that Paul Manafort has said, 'You have me and I’m going to give you the truth and nothing but the truth,'" Starr said. "So I think this is this is really good for the country."
On Manafort agreeing to the deal, Starr said, “Given the seriousness of the charges that were awaiting him, he did the right thing. He did the smart thing.”
Manafort pleaded guilty Friday to two counts of conspiracy, and agreed to fully cooperate with Mueller’s investigation of Russian interference in the 2016 presidential election and any possible collusion by Trump associates.
The former Trump campaign chairman and foreign lobbyist, who had already been found guilty of eight counts of tax fraud by a federal jury in Virginia, was supposed to begin a second trial in a Washington, D.C., federal court on Monday. In his deal with the special counsel, he agreed to "broad" cooperation and to participate in “interviews, briefings, producing documents, testifying in other matters.”
Appearing with Starr on This Week was Norman Eisen, who served as President Obama’s chief ethics lawyer for the first two years of his administration.
Eisen said he doesn't think Mueller would have offered the plea deal unless there was "very powerful evidence" that Manafort could contribute information important to the investigation.
“I would say there is no prosecutor alive who's more rigorous than Bob,” Eisen said, referring to Mueller. “I don't think — given the nature of the fight that Manafort put up, the seriousness of the crimes, and the power of the evidence of those crimes, Jon — that this deal would have been offered absent some very powerful evidence.”
“We don’t know for sure,” he said, “but I think there's a substantial possibility that this evidence that Manafort is offering will implicate somebody up the chain.”
“Who is up the chain from Paul Manafort?” Eisen added. “Don Jr. … Potentially the president himself.”
Manafort was present at a June 2016 meeting at Trump Tower between Trump campaign members and a Russian lawyer. The meeting was arranged by Donald Trump Jr. after he was told the Russian had damaging information on Hillary Clinton.
Eisen said Sunday of Manafort, "For the first time, we have somebody who was at the infamous Trump Tower meeting. We have his notes. He can explain his notes. He can talk about the run-up to the meeting, the afterwards.”
“He’s not going to survive Manafort’s testimony,” Eisen added of President Trump. “That’s my prediction.”
On whether Trump could still pardon Manafort, Starr said, “He has the power to do that. And then I think it really becomes an issue of, is that an abuse of power on the part of the president in light of an ongoing investigation?”
“The pardon will only — in my view, will only hurt Trump. It will only dig the hole deeper,” Eisen said.
Copyright © 2018, ABC Radio. All rights reserved.