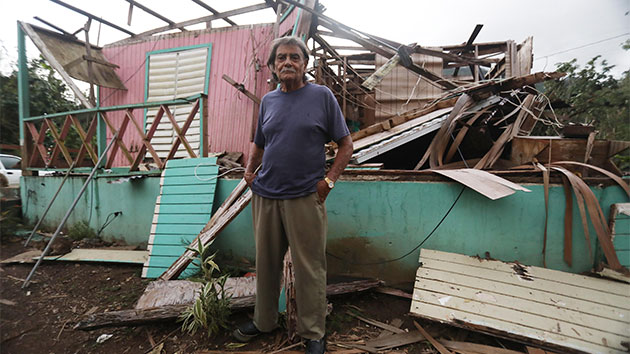 Long argued on Sunday morning that a study by George Washington University, which estimated the death toll in Puerto Rico at 2,975 people, considered additional causes of death that did not result from the hurricane itself.

"You might see more deaths indirectly occur as time goes on because people might have heart attacks due to stress, they fall off their house trying to fix their roof, they die in car crashes because they went through an intersection where the stoplights aren't working," Long said on NBC’s "Meet the Press."

Long said there is a difference between "indirect and direct" deaths, and death toll numbers from recent studies are "all over the place."

"Spousal abuse goes through the roof. You can't blame spousal abuse after a disaster on anybody," Long added.

"I think what we're trying to do, in my opinion, is just figure out why people died from direct deaths, which is the wind, the water, and the waves, buildings collapsing," Long said.

The George Washington University study looked at "excess" deaths in the six months following Hurricane Maria, taking into account the expected number of deaths in Puerto Rico each month based on historic data, and noting how many additional people actually died. That number – 2,975 – was accepted by the Puerto Rican government as the official death toll for Hurricane Maria on the island.

In a pair of late night tweets on Friday night, Trump said George Washington University's conclusion there were almost 3,000 deaths was “like magic.”

“‘When Trump visited the island territory last October, OFFICIALS told him in a briefing 16 PEOPLE had died from Maria.’ The Washington Post. This was long AFTER the hurricane took place. Over many months it went to 64 PEOPLE. Then, like magic, ‘3000 PEOPLE KILLED.’” Trump tweeted on Friday.

“They hired … GWU Research to tell them how many people had died in Puerto Rico (how would they not know this?) This method was never done with previous hurricanes because other jurisdictions know how many people were killed. FIFTY TIMES LAST ORIGINAL NUMBER – NO WAY!” Trump continued.

On Thursday, Trump tweeted that the high death toll in Puerto Rico was part of an effort by Democrats to make him look “as bad as possible.” He went on to question how researchers conducted the study.

“If a person died for any reason, like old age, just add them onto the list,” Trump said.

“I’d very much be willing to walk you through the scientific process of the study and how @Gwtweets arrived at the excess mortality number estimate. There is no reason to underscore the tragedy

“In the meantime, I hope you consider sending a message of support to show you stand with all of the US Citizens in Puerto Rico that lost loved ones. It would certainly be an act of respect and empathy.”

“I’m not calling any numbers into doubt,” Schultz said on ABC’s “This Week.” “We were very much supported and powered to get down there and try to be helpful.” we have suffered in the aftermath of Hurricane Maria,” Rossello wrote on Friday.