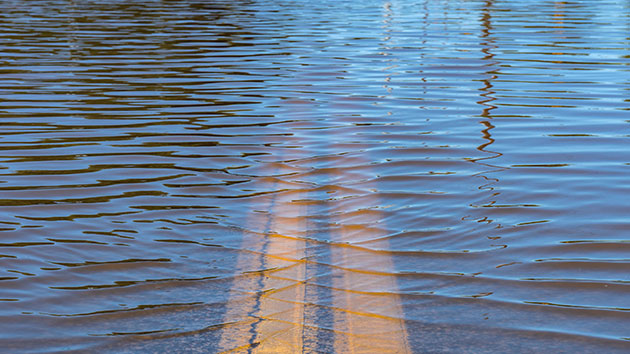 iStock/Thinkstock(NEW BERN, N.C.) — As North Carolina residents navigated rising floodwaters that in some places could double the 20 inches that have fallen so far, neighboring South Carolina was bracing overnight for the brutal wallop of widespread flash flooding, whipping wind and relentless rainfall that crept across the border into the eastern half of the state before dawn.
Florence, which weakened from a Category 1 hurricane when it made landfall early Friday morning to a tropical storm, is expected by Saturday evening to be downgraded to a tropical depression — but the torrential rain shows no signs of letting up anytime soon.
Seven people were reported dead in the storm, including a mother and her baby killed in Wilmington, North Carolina, by a falling tree. Officials in Carteret County, North Carolina, announced on Saturday morning that two people had died on Harkers Island.
There are still more than 990,000 people without power in South Carolina and North Carolina combined early Saturday.
Jeff Byard, the FEMA associate administrator for response and recovery, warned Saturday that the danger is not over.
"There is a lot of rain to come. There's a lot of rain that's following," Byard said at a news conference Saturday morning.
"A lot of rain's going to fall. It's gotta go somewhere, and we want to be prepared to respond as quickly as possible," he said.
The White House announced Saturday that President Donald Trump approved a disaster declaration for North Carolina, which makes federal funding available for temporary housing and home repairs, among other forms of assistance.
In North Carolina's Onslow County, county manager David Cotton said first responders had to make 20 home rescues, and there are still 200 to 300 people who require rescues.
"We're not going to stop until we reach all of these folks and get them to a safe shelter," Cotton told Good Morning America Saturday morning. "Right now, we are actively in the process of rescuing those that we can reach, and we have a plan to reach the rest."
He said that "unfortunately" conditions in his county were "deteriorating overnight."
"We received significant rainfall, and that has led to countywide flooding," Cotton said.
There were 385 people rescued overnight in the town of New Bern, and there may be about 100 others still in need of rescue there, according to the city's public information officer, Colleen Roberts.
Dozens of North Carolina residents and several animals were rescued Friday night into early Saturday morning in the state’s third-largest county, Cateret, according to a county EMS spokesperson.
The 1,300-square-mile outcropping — home to about 65,000 people — is surrounded on three sides by the Atlantic Ocean.
Catastrophic flooding wreaked havoc on parts of eastern North Carolina, which sustained 2 feet of rain in some areas, and up to 40 inches in other hard-hit spots. Newport, North Carolina, reported 23.75 inches of rainfall by 5 a.m. Saturday. Hoffman, North Carolina, had seen 19.96 inches. Conway, South Carolina, had seen 8.68 inches — with two days of rainfall to come.
Forecasters are anticipating landslides near the Appalachians and near-record river flooding.
Flooding there is so heavy that rescue operations had to be suspended early Saturday morning until daylight. Meanwhile, Florence crept across the border into South Carolina overnight, with tropical storm-force winds still extending 175 miles from the center.
Just south and west of Carteret, new flash flood emergencies were issued in bordering Onslow and Duplin counties around 3:30 a.m. The latest forecasts indicate that rainfall totals could reach 40 inches in southeast North Carolina and northeast South Carolina.
Norman Bryson, director of emergency services in Onslow County, said as many as 300 people may require rescue services on Saturday as floodwaters continue to rise.
Flooding is anticipated in Charlotte, North Carolina — more than 200 miles inland — as well as Fayetteville and Columbia.
Storm surges could reach 11 feet Saturday along coastal areas, particularly between Cape Fear and Cape Hatteras.
By late Friday evening, tropical storm-force winds reaching 85 mph were slamming the coast of both states.
An additional 6 to 10 inches of rain were expected to shower South Carolina from its eastern shore to locations 75 to 100 miles inland.
President Donald Trump declared a state of emergency in South Carolina ahead of the storm.
Copyright © 2018, ABC Radio. All rights reserved.