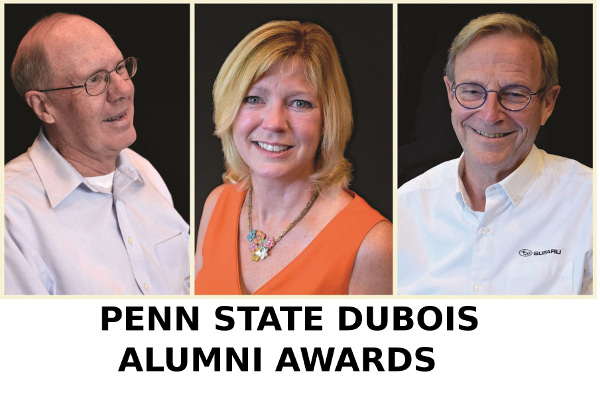 DuBois, PA – Three individuals will be honored for their success, as well as their support for the campus at the Penn State DuBois Alumni Society Alumni Awards Ceremony on October 6.

The Alumni Awards program will be part of the Penn State DuBois Benefit Celebration this year, with recognition of recipients preceding a performance by Leonard, Coleman and Blunt, (LCB) the former lead signers of the Temptations, the Platters, and the Drifters.

To be recognized this year are Robert Johnson, receiving the Distinguished Ambassador Award, Christine Beretsel, the Outstanding Alumni Award, and Ross Kester, the Lifetime Achievement Award.

Robert Johnson has supported Penn State DuBois for many years. He is a former secretary for the DuBois Educational Foundation (DEF), and chaired the fundraising committee for the construction of the DEF Building on campus. He regularly sponsors fundraising events such as the Lion Wine and Cheese and the DEF golf outing.

Johnson graduated from Penn State with a bachelor’s degree in marketing in 1971. He opened Johnson Motors in 1972, and in his 45th year in business deals in a variety of brands of new cars, as well as pre-owned vehicles.

Beretsel began her long relationship with Penn State DuBois as an undergraduate in 1986. She earned her bachelor’s degree in accounting and went on to complete an MBA from Villanova. She also completed the Certified Financial Planning program at the American College for Financial Services.

Beretsel worked for Merck for 29 years in finance, manufacturing, and information technology. She had the opportunity to support both U.S. and international operations, traveling to locations in Europe and Asia.  She retired in 2015, and now teaches Personal Finance at DeSales University as an adjunct professor.  She is a member of the Penn State DuBois Greater Penn State Campaign Committee, a supporter of BEST Robotics at Penn State DuBois, and recently established an Open Doors Scholarship at the campus.

Kester retired from Penn State DuBois in 2007 after nearly 30 years as a senior instructor in engineering. Before joining the campus faculty full-time in 1978, Kester received his bachelor’s and master’s in education from Penn State.  He has worked as a consulting engineer and designed pneumatic conveying equipment. He has established several scholarships at the campus, including his most recent, an Open Doors Scholarship in honor of his friend and former colleague, the late William H. Keown.

With the Alumni Awards, the Benefit Celebration will also include a reception, dinner, drinks, and the LCB performance all for the ticket price of $100, with $50 from each ticket sale being donated directly to Penn State DuBois scholarship funds.