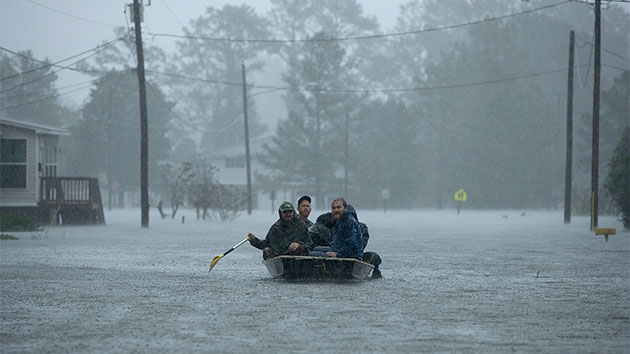 "We have never seen flash flooding like this in our state," state Transportation Secretary Jim Trogdon added at a press conference Saturday afternoon.

Trogdon said flash flooding will last for several days and river and marine flooding could last up to a week.

"We just don't want people to think this thing is over, because it's not," North Carolina Gov. Roy Cooper added Saturday of Florence, which made landfall near Wrightsville Beach Friday morning as a hurricane and has since been downgraded to a tropical storm.

"We know the water is rising fast everywhere — even in places that don't typically flood," Cooper said.

Catastrophic flooding has already wreaked havoc on parts of eastern North Carolina, which sustained 2 feet of rain in some areas, and up to 40 inches in other hard-hit spots.

At least 13 people were reported dead in the storm, with one in South Carolina and the other 10 in North Carolina.

Among the fatalities are a mother and her baby killed in Wilmington, North Carolina, by a falling tree, and an 81-year-old man who fell and struck his head while packing to evacuate in Wayne County, North Carolina.

There were nearly 800,000 people without power in North and South Carolina combined Saturday evening.

As the water levels rise, dire rescues are ongoing.

First responders and volunteers are going door to door, by boat and air, navigating dangerous currents to get to those who are trapped.

"When you can help your fellow man, you can get out there and do what you're trained to do, that's a great thing," Bill Reddon of the New York Fire Department said.

Heavy rain is expected to continue in North and South Carolina over the next few days. That will bring additional water to the already-soaked states as well as additional threats like possible landslides near the Appalachians and electrocution threats with downed power lines.

The rain and flooding expected Saturday could double the 10 to 20 inches that have fallen so far.

The Cape Fear River in Fayetteville could crest at 62 feet — 4 feet above major flood stage.

Fayetteville's mayor called the potential flooding “a serious, life threatening matter” and that anyone who anyone that stays should contact next of kin because of the possible loss of life.

Flooding is even anticipated in Charlotte — more than 200 miles inland — as well as Fayetteville and Columbia.