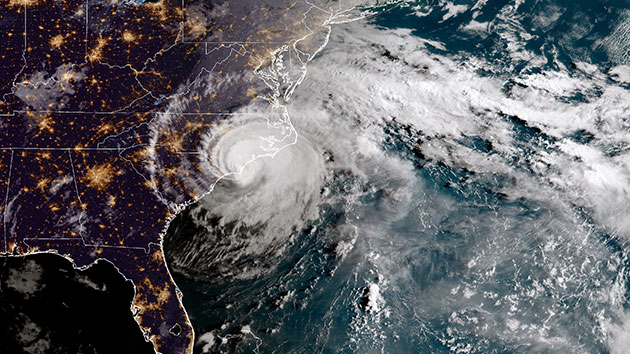 (WILMINGTON, N.C.) — The total extent of devastation from Florence, which has turned from a hurricane into a tropical storm, remains unknown as rain and flooding continue to wreak havoc in the Carolinas.

There have been at least 13 storm-related deaths since Florence, then a Category-1 hurricane, made landfall Friday morning. Not all of their identities have been publicly released but some details about the ways in which they died are available.

A 41-year-old mother and her 7-month-old son were killed in Wilmington, North Carolina, when a tree fell on their home, officials said. The woman's husband was injured in the incident and taken to a nearby hospital, according to police.

A 78-year-old man in Kinston, North Carolina, was electrocuted when he tried to connect two extension cords outside in the rain, according to Lenoir County Emergency Services Director Roger Dail.

A 77-year-old man in Lenoir County, North Carolina, fell and died from "a cardiac event" while checking on dogs outside during the storm, officials said.

An 81-year-old man died in Wayne County when he fell and struck his head while packing to evacuate, officials said.

A 68-year-old man in Lenoir County who died when he was electrocuted while plugging in a generator.

A husband and wife also died in a house fire in Cumberland County, officials said.

The only storm-related death in South Carolina was confirmed by South Carolina Highway Patrol who said that a woman died Friday night after the car she was driving struck a tree.

Heavy rain and flooding are expected to continue at least through the weekend, and local officials said hundreds in areas hit by Florence still need rescue.

Mandatory evacuations were ordered ahead of Florence’s landfall in parts of North and South Carolina, though many people chose to remain in their homes for reasons ranging from financial concerns and the need to care for pets that they may not have been able to take to some evacuation shelters, some who stayed in their residences told ABC News ahead of the storm.

"Honestly, I'm not sure" why some people refused to follow evacuation orders, David Cotton, county manager for North Carolina's Onslow County, told "Good Morning America" on Saturday. "More than likely it's maybe a mindset of 'we've been through this before,'" he said.