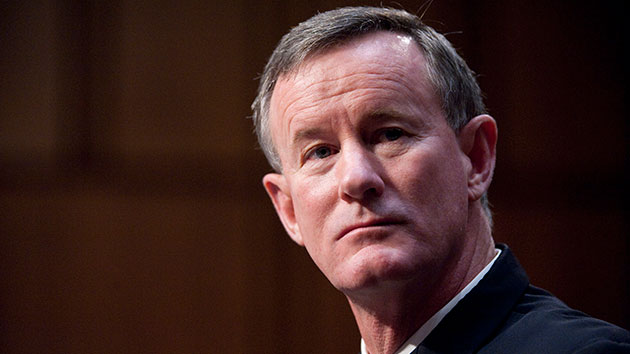 Bill Clark/CQ Roll Call(WASHINGTON) — Retired Adm. William "Bill" McRaven, who led the mission to kill Osama bin Laden, resigned from his post on the Pentagon's Defense Innovation Board last month, just days after he publicly criticized President Donald Trump, the Pentagon confirmed Thursday.
"I can confirm that Admiral (Ret.) William H. McRaven resigned from the Defense Innovation Board, effective Aug. 20, 2018,” Heather Babb, a spokesperson for the Pentagon, told ABC News on Thursday. "The department appreciates his service and contribution on the board."
The Defense Innovation Board is an independent advisory committee to the Pentagon specializing in issues related to technology and innovation.
His resignation was first reported by Defense News on Thursday.
The resignation came four days after he criticized the president for revoking the security clearance of former CIA Director John Brennan, whom McRaven called "one of the finest public servants" he’d "ever known."
"Few Americans have done more to protect this country than John. He is a man of unparalleled integrity, whose honesty and character have never been in question, except by those who don’t know him," McRaven, the former head of Special Operations Command, wrote in an op-ed for The Washington Post last month. "Therefore, I would consider it an honor if you would revoke my security clearance as well, so I can add my name to the list of men and women who have spoken up against your presidency."
"Through your actions, you have embarrassed us in the eyes of our children, humiliated us on the world stage and, worst of all, divided us as a nation," McRaven added in the op-ed.
The retired admiral, who led the Joint Special Operations Command from 2011 to 2014, noted that he had criticized Trump in the past and hoped to see Trump "rise to the occasion and become the leader this great nation needs."
"A good leader tries to embody the best qualities of his or her organization. A good leader sets the example for others to follow," McRaven wrote. "A good leader always puts the welfare of others before himself or herself. Your leadership, however, has shown little of these qualities."
McRaven oversaw the 2011 mission that killed the former head of al-Qaeda, Osama bin Laden, in Pakistan.
Copyright © 2018, ABC Radio. All rights reserved.