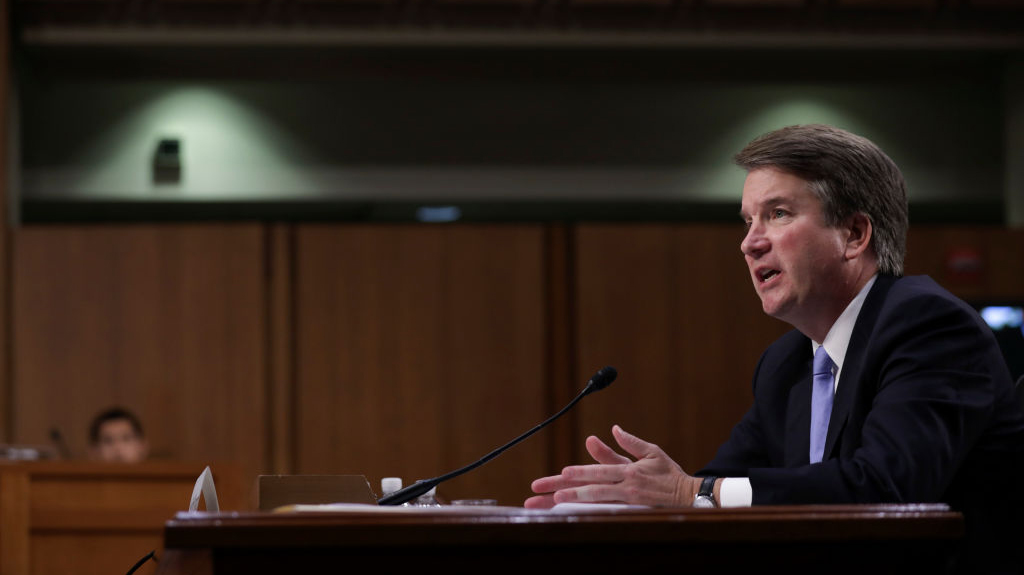 Drew Angerer/Getty Images(WASHINGTON) — A bizarre new twist has emerged in the confirmation process for Judge Brett Kavanaugh, the president's pick to be the next Supreme Court Justice.
The top Democrat on the Senate Judiciary Committee. Sen. Dianne Feinstein, says she has received "information" about Brett Kavanaugh and has passed it on to the FBI.
"I have received information from an individual concerning the nomination of Brett Kavanaugh to the Supreme Court. That individual strongly requested confidentiality, declined to come forward or press the matter further, and I have honored that decision. I have, however, referred the matter to federal investigative authorities," Feinstein said in a statement Thursday.
Feinstein's statement comes shortly after the Senate Judiciary Committee set a vote on Kavanaugh's confirmation for next Thursday.
The online news outlet The Intercept first reported the existence of a letter said to have been written by someone affiliated with Stanford University. It was originally sent to Rep. Anna Eshoo, who represents California's 14th district, according to several media reports. Eshoo then referred the letter to Feinstein.
Eshoo's office declined to comment on the letter, saying they do not discuss constituent casework.
Feinstein has not shared details about the letter beyond her statement Thursday, and no other senators on the Judiciary Committee have been permitted to see it, according to reports.
ABC News has not independently confirmed the Intercept's reporting and has not been given any details about the content of the letter.
The person who reportedly is the subject of the letter is said to be represented by Debra Katz, according to The Intercept. Katz is a Washington attorney whose firm’s website says she specializes in employment discrimination, sexual harassment, and whistleblower-related cases.
Katz has not responded to ABC News’ request for comment.
"There's nothing to say," Katz told BuzzFeed News Wednesday.
The FBI confirmed it had received the information "on the night of September 12." A spokesperson added, "we included it as part of Judge Kavanaugh's background file, as per the standard process."
On Thursday, Judiciary Chairman Chuck Grassley told reporters he had not seen the letter firsthand.
“All I know is what I read in some two or three sentences in some report that came out overnight, and since I don't know anything more about it then what I read, that's all I can say at this point,” Grassley said.
He went on: “All I know is what I read and I wouldn't make any judgment of it until I had more information.”
Separately, Grassley’s spokesperson George Hartmann told ABC News that Grassley is “respecting the request for confidentiality.”
“There’s no plan to change the committee’s consideration of Judge Kavanaugh’s nomination,” Hartmann said in a statement.
The White House also weighed in with a statement on Thursday.
“Throughout his confirmation process, Judge Kavanaugh has had 65 meetings with senators—including with Senator Feinstein—sat through over 30 hours of testimony, addressed over 2,000 questions in a public setting and additional questions in a confidential session. Not until the eve of his confirmation has Sen. Feinstein or anyone raised the specter of new ‘information’ about him," White House spokesperson Kerri Kupec said in a statement.
"Throughout 25 years of public service, the Federal Bureau of Investigation has thoroughly and repeatedly vetted Judge Kavanaugh, dating back to 1993, for some of the most highly sensitive roles. He has served in the Office of Independent Counsel, the White House, and on the D.C. Circuit Court of Appeals, all before his nomination earlier this year to serve as Associate Justice on the Supreme Court," she said.
Senator Schumer promised to ‘oppose Judge Kavanaugh’s nomination with everything I have,’ and it appears he is delivering with this 11th hour attempt to delay his confirmation,” Kupec said.