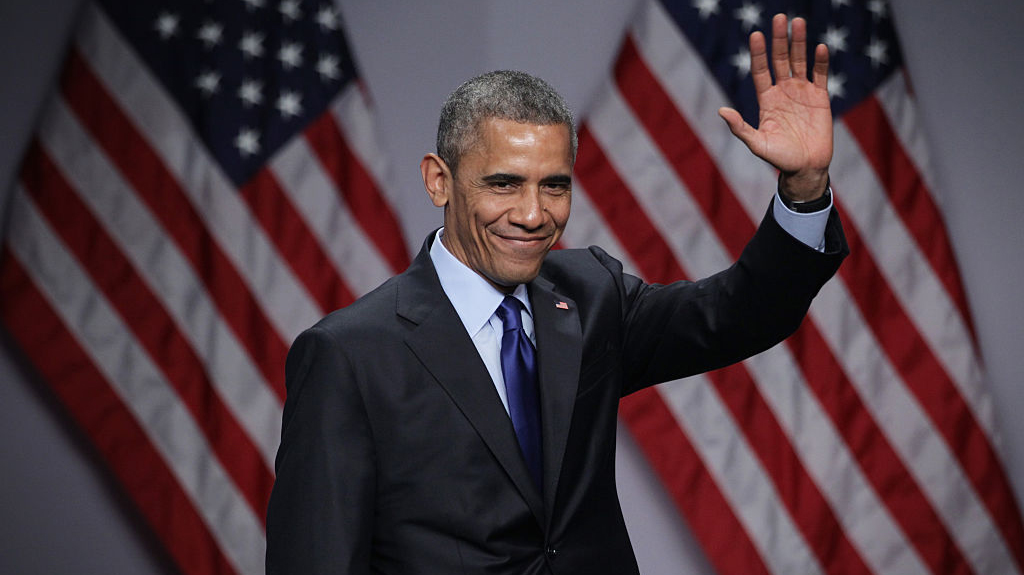 Alex Wong/Getty Images(CLEVELAND) — Continuing his reemergence on the campaign trail in the lead up to the 2018 midterm elections, former President Barack Obama urged a crowd of roughly 3,000 people gathered on a hot and humid late summer night in Cleveland, Ohio, to "restore some sanity to our politics, and give the power back to the American people."
Appearing at a rally for Ohio gubernatorial candidate Richard Cordray, Obama offered more stark criticism of a Republican Party he says is refusing to act as a check on President Donald Trump.
"None of this is conservative. This is not normal what we’re seeing, it is radical. It’s a vision that says it’s more important for folks that are in power to protect that power even if it hurts the country," Obama said alongside Cordray, a former official in his two-term administration.
"Instead of being a check…Republicans in Congress are bending over backwards to protect and shield," Obama added, "That's now how democracy is supposed to work."
The 44th president took more than one implicit swipe at President Donald Trump, criticizing the current administration's decision to enforce an immigration policy that lead to the separation of some immigrant children from their families at the U.S.-Mexico border earlier this year.
"There’s nothing compassionate about separating immigrant children from their moms," Obama said.
But in a reprisal of a message he delivered in a speech last week at the University of Illinois, Obama said that the "biggest threat to our democracy is indifference," and urged not only Democrats to turn out in 2018, but independents and Republicans disillusioned with the current state of American politics.
"This fall we cannot afford that kind of complacency, we can’t afford to sit this one out. If you don’t like what’s going on right now you can’t just complain…you can’t just boo, you’ve got to vote," Obama said.
The former president, who has largely stayed out of politics since leaving office in January 2017, also defended his administration's major policy programs like the Affordable Care Act (ACA), casting the midterms as a referendum on a more inclusive healthcare system.
"When you vote you have the power to make sure a family keeps their health insurance, you can save somebody’s life, that power is in your hands," Obama urged the crowd.
Cordray, 59, was appointed the first Director of the Consumer Financial Protection Bureau (CFPB) by Obama in 2012, and is facing off against Ohio's Republican Attorney General Mike DeWine in one of Democrats' best opportunities to flip a gubernatorial seat this cycle.
In his speech introducing Obama, Cordray recounted his appointment as head of the CFPB, and said the issue of healthcare "sharply represents" what his race against DeWine is about.
"Some of those fights are not over, not by a long shot," Cordray said of the continued Republican efforts to chip away at the ACA, Obama's signature policy achievement, "It’s just wrong, and we’re not going to let it happen."
The Cleveland rally comes less than a week after Obama's fiery rebuke to Trump in that Illinois speech, calling the 2018 elections a "pivotal moment" with "dire" consequences for the country.
That speech marked a dramatic course change for the former president, who has largely stayed out of politics since the 2016 election, and vaulted him back in the national political fray as a key figure leading up to the first major election since Trump's inauguration.
"If you thought elections don’t matter I hope these last two years have corrected that impression," said Obama, who hit the trail with a host of Democratic candidates for the U.S. House in southern California last weekend.
Democrats have high hopes in Ohio after eight years of the Republican administration of Gov. John Kasich, hopes that were bolstered after they fell just over 1,500 votes short of winning an August special election for a congressional seat in a district Donald Trump won by double-digits in 2016.
Joining the rally were former Rep. Betty Sutton, Cordray's running mate, and Ohio Sen. Sherrod Brown, a Democrat who is up for re-election this cycle in a seat the party must hold if it has any chance of wresting control of the U.S. Senate back from Republicans in 2018.
President Trump's son, Donald Jr., will also be in the state on Thursday, campaigning for Brown's GOP opponent Rep. Jim Renacci and attending a fundraiser for DeWine.
A return to the Rust Belt

In 2016, Democratic losses in Pennsylvania, Ohio, Michigan and Wisconsin, all states Obama carried in his two presidential bids, delivered the presidency to Donald Trump.
But with the national political environment in their favor, Trump's approval rating in the mid-30s, according to a recent ABC News/Washington Post poll, and the historical disadvantage the incumbent president's party faces in the midterm elections, Democrats are eyeing the Midwest, and Ohio in particular, as a place to avenge those losses.
Key to statewide victory in 2018 will be boosting turnout in northeast Ohio and the Cleveland area, Democratic strongholds with a large African-American population that helped carry Obama to victory in the state.
"Obama is still very popular in Ohio. But he’s not just coming to Ohio, he’s not just coming to Cleveland, he’s coming to East Cleveland. Which I think is a real sign that his job is to get African-American voters fired up for the election," David Cohen, Professor of Political Science at the University of Akron, told ABC News.
Hillary Clinton's margin of victory dipped voter turnout in Cuyahoga County, where Cleveland is located, from just over 670,000 to under 620,000, according to data from the Ohio Secretary of State's office.
"The Cordray campaign understands that what happened in 2016 was partially a result of the fact that there wasn’t as much enthusiasm for Hillary Clinton in the northeastern part of the state, in African-American communities as there was of course for President Obama," Cohen added.
Aside from the governor's race, the party is eyeing Ohio's 12th Congressional District, where Democrat Danny O'Connor and Republican Troy Balderson are locked in a rematch following the August special election, and the state's 1st Congressional District, where GOP Rep. Steve Chabot is facing 36-year-old Hamilton County Clerk of Courts Aftab Pureval for another traditionally red seat.
"On Election Night I would not be surprised if both of those seats flipped to the Democrats," Cohen said, "Especially if the Democratic wave is going to be as big as some people are predicting."
An Obama alum gets a boost from his former boss
To win in November, Cordray will have to both boost turnout in the state's urban centers and broaden his appeal to reach voters that backed Obama in 2008 and 2012, but gravitated toward Donald Trump in 2016.
National Democrats are optimistic that the mild-mannered Cordray can do just that.
"Richard Cordray has spent his career fighting for families who have been taken advantage of, and over the course of his career, he has fought to put money in the pockets of the middle class," said David Turner, a spokesman for the Democratic Governors Association (DGA), "He can appeal to Obama-Trump voters for that very reason – they know Richard Cordray will put workers first, not big business."
Ahead of Obama's visit to Ohio, a GOP spokesperson called the former president's speech last week an "insult."
"Ohioans rejected the continuation of Obama policies in 2016 and won't take kindly to more of these Democrats' insults. Ohioans are happy with the direction we're headed under strong Republican leadership," RNC spokesperson Mandi Merritt wrote in a statement Wednesday.
Republicans are also seeking to use the former president's visit as a reminder of Cordray's tenure at the consumer watchdog agency that became mired in controversy last year when his retirement sparked a legal battle over who would replace him.
At the time, President Trump characterized the agency as a "total disaster" under Cordray.
Cordray defended the agency, calling acting director Mick Mulvaney, a "squatter" at the agency and slamming Trump, writing on Twitter: "The fish rots from the head down."