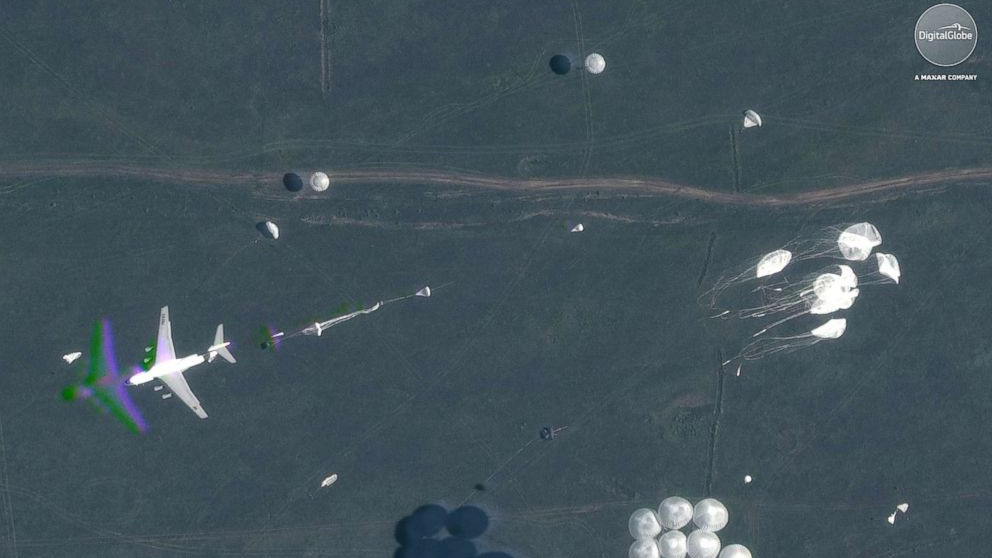 Satellite image (c)2018 DigitalGlobe, a Maxar company(TSUGOL, Russia) — Russian President Vladimir Putin Thursday watched a huge simulated battle put on by Russian and Chinese troops, as he attended the largest so-called war games in his country’s history.
Putin attended the climax of the Vostok or “East” 2018 exercises that have been held across Russia’s far eastern regions this week.
After the mock battle, Putin oversaw a vast combined military parade of Russian and Chinese troops, who joined the exercise for the first time.
The military spectacle was a remarkable instance of Russian and Chinese cooperation and one that seemed intended as a coordinated attempt to promote both countries’ ambitions to be dominant global powers.
The elaborate display took place at Tsugol training range close to the Russian city of Chita, roughly 3,600 miles from Moscow. There, just north of Mongolia, a neat, square battle camp had been constructed, divided into Russian and Chinese sections.
Russia’s military has said the Vostok drills are of unprecedented scale, involving 300,000 troops and over 36,000 tanks.
Many experts have said those numbers are heavily exaggerated, however. But Thursday’s exercise was clearly intended to impress with size. Dozens of helicopters and hundreds of tanks took part in the mock battle.
The scenario called for mixed Russian and Chinese forces to fight over a river crossing. Watched by Putin from an observation tower, waves of helicopters launched the battle.
Chinese fighting vehicles drove into the field, as Russian Ka-52 and Mi-24 gunships strafed. Forty-two warplanes later joined the bombardment, along with artillery and multiple-rocket launchers. Ash and acrid smoke from the blast floated back onto the spectators.
The display seemed larger than that at the Zapad war games last year that alarmed parts of Europe.
More symbolically striking than the battle was the parade recalling those that Putin watches in Red Square but here was held on an empty plain.
Hundreds of tanks and trucks stood in massed ranks, as dozens more paraded past. A band played mostly Russian (or rather Soviet) marches.
Standing on a grandstand, Putin— who had flown to the exercises after hosting China’s president Xi Jing Ping in Vladivostok— hailed the troops for ensuring a common “Eurasian security”.
“Russia is a peace-loving country,” Putin said, adding it could never have aggressive plans. But it would continue to develop its military, he said, to be able to defend itself and its allies.
A Chinese commander, Lt. Gen. Sho Yuanmin, speaking to journalists afterward, said military cooperation was now constant between Russia and China, and enthused over the opportunity to learn from Russia’s more experienced troops.
But experts are skeptical of how deep the warm feeling goes, noting both sides, in reality, are wary after decades of rivalry that saw the countries almost fight a war in 1969.
The military power displayed was also thinner than it was presented, some experts said.
Considerable effort had gone into the spectacle. Tanks and trucks had been parked artfully in lines across the hills behind the main parade to give the impression that the army stretched on and on.

No big gatherings for Saint Patrick’s Day in Boston: ‘We are so close to a finish line’
Victoria’s Secret plans to close up to 50 more stores this year
NBA postpones San Antonio, Charlotte games after 4 Spurs test positive
Biden plays video games with family, shows off presidential ‘swag’ at Camp David
Nets’ Kevin Durant to miss two games due to hamstring strain
Report: Toronto Raptors to play home games in Tampa for the rest of the season