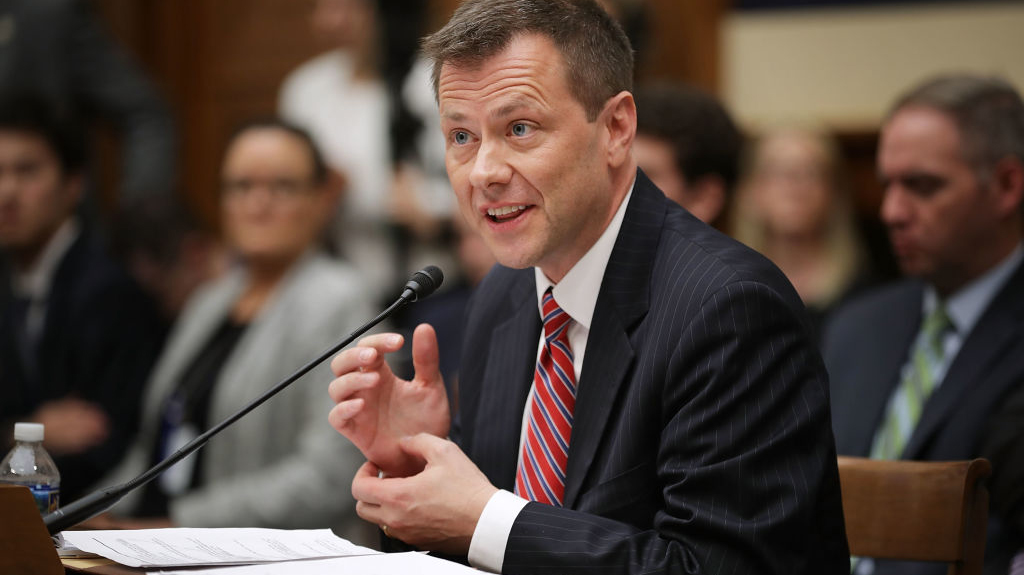 Chip Somodevilla/Getty Images(WASHINGTON) — More than 100 pages of newly-recovered text messages show that former FBI officials Peter Strzok and Lisa Page used authorized channels within the FBI to help shape what they viewed as misguided media reports, and they expressed deep concern about politically-motivated leaks they suspected came from outside the FBI and Justice Department.
ABC News was able to review the full batch of text messages on Thursday, just days after at least one Republican lawmaker released only two of the hundreds of text messages to allege "a coordinated effort on the part of the FBI and DOJ to release information in the public domain potentially harmful to President Donald Trump’s administration."
The text messages do show the FBI was in regular contact with certain reporters, but it was the head of the FBI's National Press Office — the agency's representative to the press — who was engaging with reporters, according to the documents. And those contacts were often intended to shape stories already in the works by reporters or to seek changes to stories that had already been published, the text messages suggest.
For example, on Dec. 16, 2016, the Washington Post published a story under the headline: “FBI in agreement with CIA that Russia aimed to help Trump win White House.”
In text messages that day, Strzok told Page that the article’s “angle” – “the notion that somehow we’ve come around to the agency’s position” – “really infuriates me.”
Strzok wrote to Page that the FBI has always believed “there were a variety of motives,” and it’s the CIA that later changed its position. So, the text messages show the head of the FBI’s National Press Office tried to get the story updated.
At least the headline was revised, but Strzok privately still took issue with it.
The “agency plays the game better than we do,” Strzok lamented in a text message, insisting the CIA’s public relations efforts were more effective than the FBI’s.
Before being relegated to the FBI's human resources division last year and then fired from the FBI last month, Strzok helped lead the agency's investigation into Russian meddling in the 2016 presidential election and any possible contacts between Trump associates and Russian operatives. Page was an attorney for the FBI.
The text messages reviewed by ABC News on Thursday also show that in February 2016, as the New York Times was preparing to report that Trump associates “had repeated contacts with senior Russian intelligence officials in the year before the election,” the top FBI spokesman talked repeatedly with the newspaper's reporters.
"[He] ran through boss’ thinking/timeline/narrative on this," Strzok wrote to Page on Feb. 14, 2017. But months later, then-FBI Director James Comey testified to Congress that "in the main" the story as published "was not true."
Still, in a letter to the Justice Department on Monday, one of Trump's staunchest allies, Rep. Mark Meadows, a North Carolina Republican, called the newly-recovered text messages "troubling."
He specifically pointed to a text message sent by Strzok on April 10, 2017, in which Strzok told Page he wanted “to talk to you about media leak strategy with DOJ.”
Strzok’s attorney then released his own statement, insisting the text messages reflect a renewed Justice Department and FBI effort to stop media leaks – not promote them. And a review of public announcements at the time supports the attorney’s claims, including a subsequent announcement from Attorney General Jeff Sessions during that period that the Justice Department and FBI had been working on ways to deter media leaks.
Meanwhile, in the newly-recovered text messages, Strzok and Page repeatedly speculated over who might be leaking information to reporters.
“Would make sense for the Hill to start strategically leaking to prep the scene for Monday,” Strzok wrote on March 17, 2017, after the Washington Post obtained certain information ahead of Comey’s much-anticipated testimony to lawmakers three days later.
Then a week later, when discussing internal investigators looking into the source of leaks, Strzok wrote Page: “I hope they understand the primary likelies are the [political appointees] at WH and DoJ, not the poor” agents and analysts at the FBI.
Months earlier, when the New York Times began working on a story about previous cyber attacks targeting Republicans, Strzok seemed to speculate that other U.S. agencies were behind the story.
“Think our sisters have begun leaking like mad,” he wrote Page in December 2016. “Scorned and worried and political, they’re into overdrive.”
On Thursday morning, Trump launched another Twitter attack on the FBI and Justice Department, saying “more text messages between former FBI employees Peter Strzok and Lisa Page are a disaster and embarrassment.”
"'Others were leaking like mad’ in order to get to the President!" he tweeted.
Strzok was fired from the FBI last month for sending a series of anti-Trump text messages to Page in the run-up to the 2016 election and in the months afterward. Page has also left the FBI.
In January, the Justice Department handed lawmakers more than 1,300 messages sent between Strzok and Page.
The messages caused a political firestorm, but at the time the Justice Department said five months’ worth of messages had gone missing from the FBI and would have to be recovered. Many of those messages have now been recovered and are the ones that ABC News reviewed on Thursday.
They were sent to members of Congress and include more anti-Trump sentiments.
It's unclear whether all the messages have been recovered.