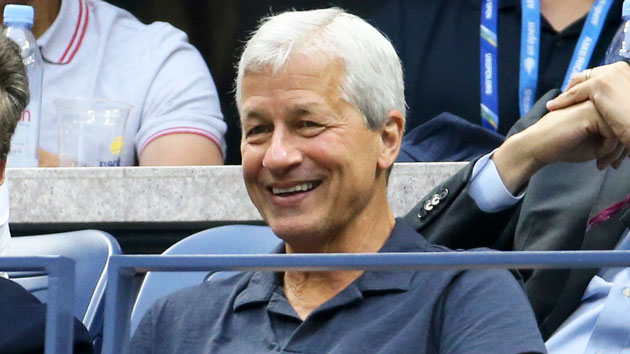 Jean Catuffe/GC Images(WASHINGTON) — JPMorgan Chase CEO Jamie Dimon said he shouldn't have bragged about being able to beat Donald Trump, adding that his comments show he probably shouldn't run for president.
"I shouldn't have said that," Dimon told ABC's Rebecca Jarvis Wednesday in an exclusive interview after making the comments during a panel with her in New York.
Dimon was asked if he thought he could beat Trump in an election during an event to announce a new "Advancing Cities" initiative.
"Yeah. I do, yeah. Because I'm as tough as he is, I'm smarter than he is. I would be fine," Dimon said on the panel. "He could punch me all he wants, it wouldn't work with me. I'd fight right back."
Dimon added that the Democratic Party has "got to get their act together in terms of understanding how society actually works."
Dimon was announcing JPMorgan Chase's $500 million initiative to economically advance select cities around the world. The company said its goal is to attract an additional $1 billion from outside investors.
Following the event, the bank also released a statement from Dimon walking back his comments.
"I should not have said it. I’m not running for President. Proves I wouldn’t make a good politician. I get frustrated because I want all sides to come together to help solve big problems," Dimon said in the statement.
But earlier during the event, Dimon took a swipe at Trump's inheritance and accomplishments as a businessman.
"I mean, I've said this before Trump was elected. You're not going to get a wealthy New Yorker elected president. Boy, I was dead wrong. And by the way, this wealthy New Yorker [pointing to himself] actually earned his money. It wasn't a gift from daddy," Dimon said.
"I grew up in a poorer part of Queens than he did, but I am a banker. I am part of the elite," Dimon continued. "I don't think the American public looks at Trump as part of the elite. They look at him as the upstart who punched the elite in the nose every day. And so I think — I think I could beat Trump. I can't beat the liberal side of the Democratic party."
This is not the first time Dimon has taken back things he's said about Trump.
In November, when asked if he thought Trump would serve one or two terms, the CEO said if he "had to bet," Dimon thought Trump would only serve one term.
Dimon later said he wished he hadn't said that, adding, "I’m not a political expert."
Copyright © 2018, ABC Radio. All rights reserved.