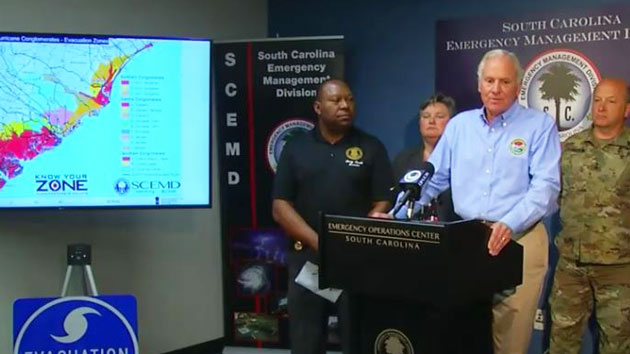 ABCNews.com(NEW YORK) — Hurricane Florence, dubbed the "storm of a lifetime" by the National Weather Service, has slowed dramatically overnight Wednesday and may not officially make landfall until the weekend. While this may lessen wind speeds by landfall, it could increase rainfall totals to as much as 40 inches in North Carolina.
Florence is a dangerous Category 4 hurricane Wednesday morning, with maximum sustained winds of 130 mph — down from 140 mph overnight. Florence is located about 575 miles southeast of Cape Fear, North Carolina.
The path, intensity and timing of the storm is likely to keep changing through the day Wednesday, but the latest 5 a.m. update shows Florence will no longer be close to Category 5 — with winds of 145 mph — through Thursday morning.
It begins to slow down during the day Thursday and that’s when it will begin to encounter friction from land and weaken significantly.
Winds may lessen, but because of that slowdown, rainfall totals will be even higher than previously forecast. The southeast coast of North Carolina could see as much as 40 inches of rain — in line with the catastrophic flooding caused last year in the Houston area by Hurricane Harvey.
"This will likely be the storm of a lifetime for portions of the Carolina coast, and that's saying a lot given the impacts we've seen from Hurricanes Diana, Hugo, Fran, Bonnie, Floyd, and Matthew," the National Weather Service said. "I can't emphasize enough the potential for unbelievable damage from wind, storm surge, and inland flooding with this storm."
As many as 1.7 million people have been ordered to evacuate across South Carolina, North Carolina and Virginia. Many of those people were already on the road Tuesday.
"If they say leave, leave," said Jennifer Forte, who was in Kitty Hawk, North Carolina, on Tuesday and headed toward Greenville. "And my job is closed. I work for the government, they’ve closed. The school’s closed until Friday, so there’s no reason to stay, really."
North Carolina Gov. Roy Cooper advised much the same in a press conference Tuesday, warning locations hit by high winds and floodwaters could be without power for "several days."
"We’ll be asking people to prepare their emergency kit," he said. "Get food, water, if there are medications they may need. Pull together their important documents … make a plan for your pets. Also, understand that a lot of people are going to be without power probably for several days if not longer."
The federal government has made similar warnings, with FEMA Administrator Brock Long saying Florence could knock out power for "weeks."
As millions head out of the area, resources like the Red Cross are preparing to deal with the disaster — and possibly weeks of problems resulting from it.
"This is extremely serious," Major Ken Morris, with the Salvation Army’s Disaster Response Team, told ABC News. "We’ve got a number of volunteers, actually we’ve got over 3 million volunteers across the nation that can help us. But we need our partners in mission. Folks have come through wonderfully in the past and again in non-affected areas. We’ve got canteens coming in. It’s like an accordion. As this thing increases, we increase our resources."