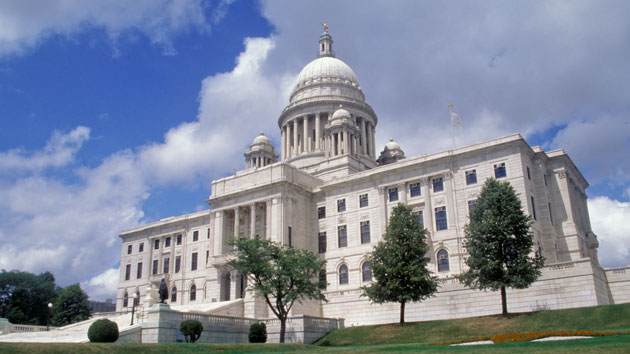 Education Images/UIG via Getty Images(WASHINGTON) — As some pundits predict a potential blue wave among the nation's statehouses this November, the one atop Smith Hill in Providence, Rhode Island, could be lighting up red.
The Rhode Island governor's race could be a rare opportunity for the GOP to go on offense in a state as blue as the famous blue bug — the 60-foot-long termite that stands next to I-95.
If Gov. Gina Raimondo, a Democrat, and Cranston, Rhode Island, Mayor Allan Fung, a Republican, win their state's gubernatorial primaries Wednesday, it would set up a rematch of the 2014 election.
And the most recent poll had Fung and Raimondo running neck and neck.
But first, in order to make it to that fight, Raimondo has to make it through a tough Democratic primary.
Raimondo's challengers include former Rhode Island Secretary of State Matt Brown.
Like other Democratic primary challengers around the country, Brown is seen as the insurgent, progressive candidate — compared to Raimondo, who as the incumbent governor, is viewed as the establishment candidate. Brown has repeatedly attacked her for her ties to Wall Street.
A similar scenario played out next door in Massachusetts, with Ayanna Pressley upsetting the Democratic establishment candidate there, Rep. Michael Capuano.
The vicious primary between Brown and Raimondo, who is vice chair of the Democratic Governors Association, started almost immediately, with both candidates attacking each other at the Rhode Island Democratic Party convention and they've continued to do so throughout the summer.
Raimondo, as primary day approached, launched a tough ad campaign to discredit Brown with allegations of running "a near-bankrupt campaign" — but in recent days the Brown campaign fired back, mailing a cease-and-desist letter to the Raimondo campaign for the ad.
The former mayor of Providence, Rhode Island, and Democratic National Committee Chairman, Joe Paolino Jr., told ABC News that he's backing Raimondo and that she'll win Wednesday night because she has got the economy on the right track.
"The economy would not be where it is today without Governor Raimondo," Paolino said.
Both Raimondo and Fung had at first refused to debate their respective challengers before Fung agreed to debate on DePetro's morning talk show.
Fung told ABC News he is looking forward to Wednesday's primary and is confident his message will resonate with GOP voters in Rhode Island. Fun's biggest challenger is State Rep. Patrica Morgan, Minority Leader in the Rhode Island House of Representatives.
He also said he's been "positive throughout the campaign."
In a state that is known for it's larger than life politicians, the Republican primary has been tame by the standards of Rhode Island politics, leaving the fireworks to Democrats — but the potential rematch would set up a bruising general election campaign.
Fung has had a general election focus and laid low, while continually hammering Raimondo on various issues ranging from immigration to the Unified Health Infrastructure Project (UHIP) crisis in which according to Fung, under the governor's watch, the new computer system failed to implement various state agencies information, causing a gigantic backlog.
"I'm encouraged by the fact that in three straight public polls I am statistically tied with her and we're going to continue to do what we need to do to get the vote out," Fung said.
Raimondo has continually made comparisons between Fung and President Trump, hoping that in a state where Hillary Clinton won by just under 20 points it will make headway.
The governor has also launched an ad blitz but has thus far not targeted Mayor Fung in any television ads. She also has a huge war chest — as of Aug. 1, Raimondo ended June with $4 million in the bank.
In the general election, each of the candidates could face former Trump delegate and state Representative Joe Trillio, running as an Independent.
Trillo, this election season, is most notable for crashing his boat — emblazoned in campaign paraphernalia — off the coast of Charlestown, Rhode Island.
Democratic Sen. Sheldon Whitehouse does not have a challenger in the primary but will have one in November: former Associate Justice of the Rhode Island Supreme Court, Bob Flanders.
Copyright © 2018, ABC Radio. All rights reserved.