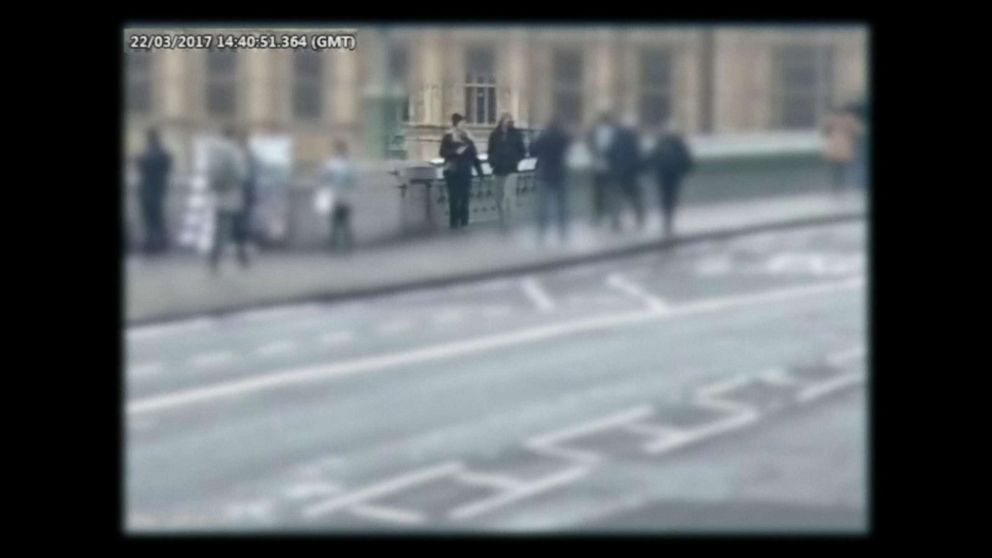 Metropolitan Police(LONDON) — The widow of the American man who died saving her in the Westminster terror attack gave evidence at an inquest in London Tuesday.
Melissa and Kurt Cochran were in London March 22, 2017, as part of a trip to celebrate their wedding anniversary.
"We were just being touristy and we had just planned on spending pretty much the entire day walking and seeing everything that we could see," Melissa Cochran told the court about the day of the attack. "We had one day in London so we were going to cram everything in that we could. We were only, I guess, about two and a half hours in London before this all happened."
Melissa Cochran told the court that she had been talking to her husband on the south side of Westminster Bridge when she "heard a car revving." The next thing said she remembered was seeing the front of a car and then being "on the ground with someone's hand on my head."
Kurt Cochran, 54, pushed his wife to safety just seconds before he was allegedly run over and killed by Khalid Masood, 52, who police say intentionally hit pedestrians on Westminster Bridge before fatally stabbing a police officer outside the Houses of Parliament.
The leader of the inquest, Chief Coroner Mark Lucraft, praised Kurt Cochran's "instinctive bravery" in acting so quickly to save his wife, adding "the lives of many were torn apart by 82 seconds of high and terrible drama."
In England, inquests allow a court to hear evidence so that a jury or coroner can come to a determination about a death, and do not decide civil or criminal liability. The inquest into the Westminster attack is expected to last about six weeks.
On Tuesday, Melissa Cochran told the court Tuesday she had no recollection of being pushed out of the way of the oncoming vehicle by her husband, but when asked if this act was typical of Kurt, she replied, "very much so."
Aysha Frayde, Leslie Rhodes, Andreea Cristea and police officer Keith Palmer were also killed in the attack, which ended when Masood was shot and killed by armed police.
Eyewitnesses also gave testimony during the second day of the inquest.
Kylie Smith, a bystander who saw the attack unfold from start to finish, broke down in tears on multiple occasions while giving evidence.
Smith described the attack, which took place over less than two minutes, as "chaos."
"There was people trying to get out of the way but nobody really had a chance," Smith told the court.
Smith said that the way Masood drove into pedestrians was "very clearly a deliberate act."
Smith said she specifically remembers seeing the Cochrans walking hand in hand on the bridge.
Moments later, she said she saw Kurt try to pull Melissa "behind him to try to save her from the impact."
The impact threw Kurt Cochran over the parapet of the bridge onto the concrete, and he died shortly after paramedics arrived on the scene.
Melissa Cochran's evidence came after family members paid tribute to Kurt Cochran on the first day of the hearing.
On Monday, Melissa's sister, Angela Stoll, read out a heartfelt statement on the widow's behalf.
"I am forever grateful for our time together, allowing me to be a mother to his children and especially for his heroic actions that fateful day that saved my life," Melissa Cochran said in the statement.
Kurt Cochran's older sister, Sandy Cochran Murphy, also told the court that the father of two had been "taken from our family in this horrific, senseless act."

Review recommends more officers, security upgrades after attack on Capitol
How life has changed 1 year into the COVID-19 pandemic: Masks, restrictions largely endure
Defense secretary says US still assessing who carried out Iraq rocket attack
When will life return to normal? Experts consider what summer, fall might look like
Three dogs attack miniature pony, one dog shot and killed
“You could save a life” – Dr. Oz urges people to learn CPR after saving a man at airport