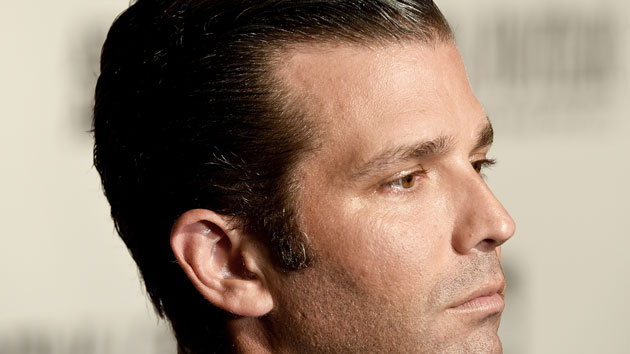 Shannon Finney/Getty Images(WASHINGTON) — Amid explosive allegations that some White House officials are actively working against President Donald Trump’s agenda, Donald Trump Jr. told ABC News the number of people in the White House that his father can trust is smaller than he’d like.
“I think there are people in there that he can trust, it's just — it's a much smaller group than I would like it to be,” Trump Jr. said in an interview aired Tuesday on ABC’s Good Morning America.
“It would be easier to get things done if you’re able to fully trust everyone around you,” he said. “I think that’s a shame.”
Donald Trump Jr. said he believes the controversial New York Times op-ed penned by an anonymous senior administration official was written by a “low-level person,” and that the Justice Department should investigate the author.
“This is very low level person who will throw their name on an op-ed, and basically subvert the vote of the American people who elected my father to do this job,” Trump Jr. said, calling the editorial “pretty disgusting” and “sad.”
“Listen, I think you're subverting the will of the people. I mean, to try to control the presidency while not the president. You have millions and millions of Americans who voted for this,” he said when asked whether any laws were broken.
The president’s eldest son, who now runs the Trump Organization with his brother Eric, and has been campaigning aggressively for Republicans ahead of the midterms, dismissed Bob Woodward’s book, “Fear: Trump in the White House,” which was released Tuesday.
“People who are well respected in this administration have come out and denied it,” he said.
“If Gen. [James] Mattis had an issue with my father he would say it to his face,” Trump Jr. said of of the defense secretary, who, according to Woodward’s book, compared Trump to a “fifth or sixth grader.”
Mattis, and multiple other administration officials, have denied the comments attributed to them in “Fear.” Woodward has said that senior Trump administration officials have not told the truth in responding to the book.
Trump Jr., 40, who is entangled in special counsel Robert Mueller’s ongoing investigation into alleged ties between the Trump campaign and Russia, said he’s not worried about his potential legal exposure.
“I’m not because I know what I did and I’m not worried about it,” Trump Jr. said.
He again denied that he spoke to his father about his June 2016 Trump Tower meeting with a Russian lawyer promising dirt on Hillary Clinton, saying that he “testified to that ad nauseum.”
“That doesn’t mean they won’t try to do something,” he said of investigators, adding that he would “deal with it as it comes.”
But, Trump Jr. acknowledged the investigation has been difficult on him personally.
“It’s obviously been very rough,” he said of the emotional toll the investigation has taken. “For a time, this has been very difficult.
“At the same time, I think I'm able to compartmentalize it,” he added. “And in the end I know what I've done, and I'm not worried about that at all, because you know, I’ve done nothing that anyone else wouldn't do in that position, in my opinion.”
Trump Jr. also predicted that “there will never be a conclusive end” to the investigation, predicting that Democrats would use the probe “as a permanent asterisk on my father's record” and use it to “sway midterms — they’ll try to use it to sway 2020.”
Trump Jr. acknowledged that Republicans will struggle to maintain control of Congress in the midterms with a Republican in the White House, saying Democrats would take the House if the election follows precedent.
“I think historically speaking, that would be what happens,” Trump Jr. said. “You know, people get complacent. Our side is getting all the things that they're wanting to because my father's delivering on all of the promises that he made. But that's what they've said, and that's what's historical.
“So our people, the MAGA people, they have to turn out. They have to get out and vote. And I think we can break history,” he said.
He added that he agrees with his father, “without question,” when he says that if there is an impeachment it will be the fault of Republican voters who don’t show up at the polls in November.
While he has become popular on the campaign trail, Trump Jr. said he hasn’t thought about running for office himself.
“I think the most important thing right now is making sure that, you know, again, I get out there, fight for the House, fight for the Senate, make sure that people get that, you know, Donald Trump and the successful policies that he has enacted, that the policies that are making America win right now, they're on the ticket in 2018.”
Trump Jr. also slammed former President Barack Obama, who recently expressed frustration with Trump taking credit for a strong economy, including 95 straight months of job creation, calling his comments “literally the most asinine thing that I’ve ever heard.”