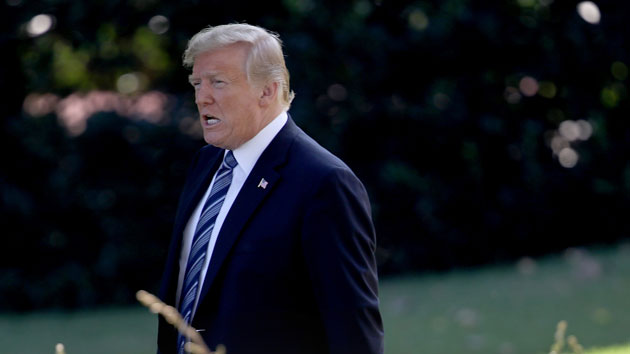 Win McNamee/Getty Images(WASHINGTON) — One of President Donald Trump’s staunchest allies in Congress, Rep. Mark Meadows, a North Carolina Republican, is doubling down on a disputed theory that the FBI condoned leaks to the news media in a coordinated effort to take down the president.
On Monday, Meadows sent a letter to the Justice Department and posted it publicly online, saying newly-released text messages between former FBI agent Peter Strzok and then-FBI attorney Lisa Page raise “grave concerns regarding an apparent systemic culture of media leaking” within the senior ranks of the FBI and Justice Department.
Hours later, on Tuesday morning, Trump tweeted that the supposed revelation is “so terrible.”
But in a statement later Tuesday, Strzok’s attorney insisted the text messages reflect an effort to stop media leaks – not promote them – and a review of Justice Department actions at the time supports the attorney’s claims.
“The President and his enablers are once again peddling unfounded conspiracy theories to mislead the American people,” Strzok’s attorney, Aitan Goelman, said in a statement on Tuesday.
At the heart of Meadows and Trump’s latest attack is a text message sent by Strzok on April 10, 2017, in which he tells Page he wants “to talk to you about media leak strategy with DOJ.”
As Meadows notes in his letter, that text message came in the midst of a series of media leaks related to the FBI’s growing probe of Russian meddling in the 2016 presidential election and any potential coordination with Trump’s associates.
Those leaks, however, were just the latest in a month-long series of leaks about the investigation and other national security-related matters being handled by the FBI and Justice Department.
According to a Senate report from Republicans, in the months after taking office, “The Trump administration faced 125 leaked stories—one leak a day— containing information that is potentially damaging to national security.”
In February last year, Trump himself complained on Twitter that "The FBI is totally unable to stop the national security 'leakers' that have permeated our government for a long time."
Six months later, Attorney General Jeff Sessions announced a Justice Department and FBI effort to “reach a new level of effectiveness” in stopping what he called “the staggering number of leaks” to the media.
Speaking to reporters in Washington at the time, Sessions said that soon after joining the Justice Department in February 2017, he “initiated a review of our leak investigations and prosecutions.”
“For the past several months, we have already made changes and are seriously ramping up our efforts,” he said. “[T]he FBI has increased resources devoted to leak cases and created a new counterintelligence unit to manage these cases. Simultaneously, the Department is reviewing policies that impact leak investigations.”
It was during this time that Strzok texted Page about the “media leak strategy with DOJ.”
“The term ‘media leak strategy’ in Mr. Strzok’s text refers to a Department-wide initiative to detect and stop leaks to the media,” Goelman, Strzok’s attorney, said in his statement.
Nevertheless, in his letter on Monday to the Justice Department, Meadows said the “troubling” text message from Strzok “suggests a coordinated effort on the part of the FBI and DOJ to release information in the public domain potentially harmful to President Donald Trump’s administration.”
Strzok was fired from the FBI last month for sending a series of anti-Trump text messages to Page in the run-up to the 2016 election and in the months afterward. Page has also left the FBI.
Copyright © 2018, ABC Radio. All rights reserved.