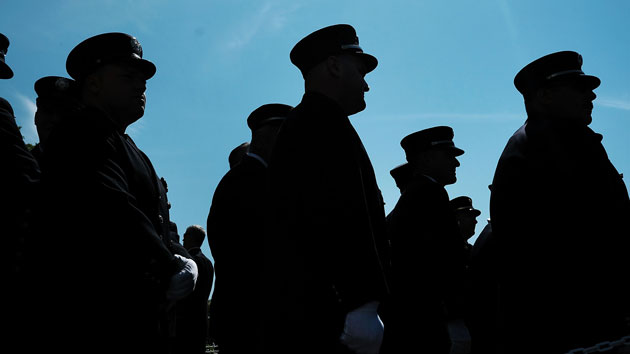 Spencer Platt/Getty Images(NEW YORK) — Hundreds of relatives of 9/11 victims gathered in downtown Manhattan Tuesday as they do on every anniversary of the attacks.
First responders and everyday people who helped were honored and recognized with emotional messages and the somber ceremony marking the 17th year since terrorists flew planes into the Twin Towers.
But one group of New York firefighters will be paying tribute to their fallen colleagues in a different manner, hundreds of miles south of the footprint of the towers.
They're showing their respect through service, traveling to North Carolina to help prepare residents for the incoming Hurricane Florence.
In an emotional Facebook post on the Fire Department of New York’s page, Battalion Chief Joseph Downey noted the decision by 82 task force members to go into the face of danger on the anniversary of the attacks.
Downey, whose father, Deputy Chief Ray Downey, was killed on 9/11, said that for him and his team, the decision to go south serves as something of a "remembrance" for the first responders who died in the attacks.
"I think it’s important that we carry on their legacy,” Downey wrote in the Facebook post. “It’s a tough day but it’s symbolic of what we do here in the city.
"A lot of people came in on 9/11 to help us out, and we’ve done it the last couple of years, going to other places and helping them out. Everybody is excited, it’s a somber day but we have to look at it as we’re doing the right thing for those we lost and our loved ones. We’re first responders. Whether we’re Fire or PD, we’re always there to help people in the city, or somewhere else," he wrote in the Facebook post.
The group, called USAR New York Task Force 1, is trained in urban search and rescue, disaster recovery, and some members have specialized water and boat operator training.
The group is being overseen by the U.S. Federal Emergency Management Agency (FEMA) and has done similar emergency response missions in other natural disasters like Hurricanes Katrina, Matthew, Harvey, Irma and Maria.
"They’re going to pre-position us and get us in the area of where the storm is going to hit,” Downey wrote in the post, “and then they’ll move us to wherever we’re needed.”
Copyright © 2018, ABC Radio. All rights reserved.

‘The Bachelorette’ recap: A liar among the group leaves Michelle and her suitors scrambling for answers
Florence Pugh explains why her ‘Black Widow’ character Yelena should be your Halloween costume
Strong wind, potential tornado caused damage over past weekend
North Carolina school board votes to make masks optional as 430 students are under quarantine
PennDOT already preparing for winter season
Disney’s 50th anniversary celebration travel guide