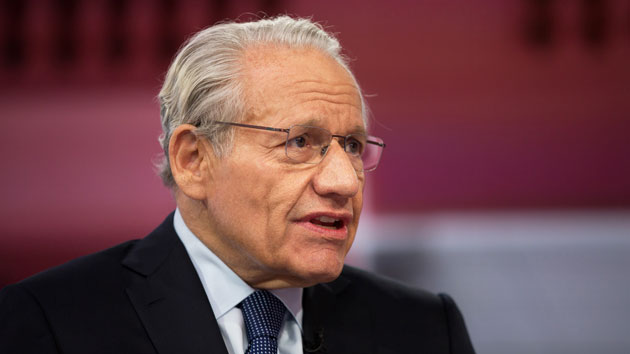 NBC / Contributor / Gettty Images(NEW YORK) — Journalist and author Bob Woodward stopped by The Late Show with Stephen Colbert on Monday to share a few surprises from his new book, "Fear: Trump in the White House."
Woodward said the book reveals shocking details about the inner-workings of Donald Trump’s administration, but the most shocking parts are centered around the president’s willingness to break with long-standing policy traditions.
“There's one scene last year in the Pentagon where Trump is there and Secretary of State [Rex] Tillerson said, ‘This is what's kept the peace for 70 years,’” Woodward recalled, referring to a conversation about national security protocols. “He's historically right, but Trump does not want to do any of that stuff. He wants to do it his own way — in a dangerous way.”
Trump doesn’t realize “that the national security for the country comes from having trade relations and having security agreements, like NATO and secret intelligence partnerships,” Woodward added, calling it one of the most shocking revelations in the book.
Woodward, a Pulitzer Prize-winning journalist, said the book is based on first-hand reporting and anonymous White House sources, including some who were extremely reluctant to disclose information, or even speak with him.
“You need to be patient. You go to their house and you knock on their door,” he said, explaining his method for cultivating good sources. “You ask if they have any documents — because no one who works at the White House doesn't bring home notes — and they say ‘no no,’ and then about the third visit they say, 'Yeah, I might have something upstairs,' and then they come down with three boxes,” he said.
“In the CIA, they tell people to ‘let the silence suck out the truth,’ so, just be quiet and and people want to talk,” he added.
"Fear: Trump in the White House" caused an uproar last week after Woodward released excerpts from the book, depicting the president as angry, frustrated and paranoid about special counsel Robert Mueller's Russia probe.
The full book was scheduled for public release Tuesday and was already ranked at the top of Amazon's best-selling books as of late Monday.
Trump called it a “work of fiction” last week and sought to discredit Woodward’s reputation.
“If you look back at Woodward’s past, he had the same problem with other presidents, he likes to get publicity, he sells some books,” Trump said last week.
"The Woodward book is a Joke – just another assault against me, in a barrage of assaults, using now disproven unnamed and anonymous sources,” he added in a tweet on Monday. “Many have already come forward to say the quotes by them, like the book, are fiction. Dems can't stand losing. I'll write the real book!"
Copyright © 2018, ABC Radio. All rights reserved.