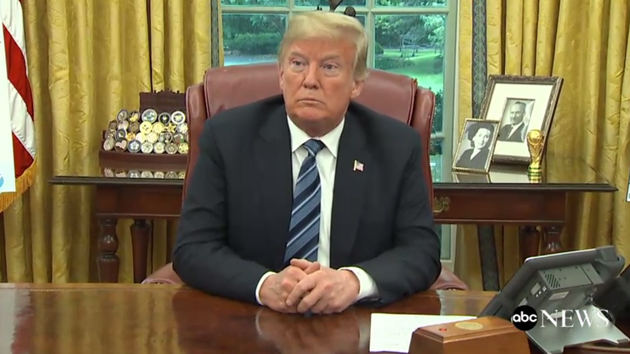 ABCNews.com(WASHINGTON) — As Hurricane Florence and other storms barrel towards the East Coast, President Donald Trump on Tuesday told reporters that “everybody is ready,” and “we are absolutely and totally prepared.”
"We're all ready. FEMA is ready. Everybody's ready. I think most importantly the people are ready. We're all ready for it. Everybody is standing by,” Trump said. “There's a chance it could be a very bad one. We're absolutely prepared."
But as residents along the coastline board up their homes, stock up on water and evacuate flood zones, the federal government is at work preparing for what some forecasters predict could be the worst storm to hit the East Coast in decades. Last year’s devastating hurricane season produced behemoth storms like Hurricane Harvey, Hurricane Irma, and Hurricane Maria, and the Trump administration faced criticism over their preparedness and response.
This year, the Trump administration faces another test.
“Disasters by their nature are unpredictable. we don’t know where they’re going to go, and as the shocking debate over the death toll count in Puerto Rico shows, getting information after disasters can also be difficult,” said Patrick Roberts, a professor in the School of Public Affairs at Virginia Tech who studies disaster management noted that last year FEMA was stretched thin because of the back to back storms. “Disasters should bring out our humility.”
“One good thing now compared to some of the other things is that the Carolinas have pretty good state-level emergency operations and at the federal level there's Fort Bragg, the military base, that has logistical capability and FEMA really needs that.”
On Monday evening, Department of Homeland Security Secretary Kirstjen Nielsen and FEMA Administrator Brock Long briefed the president by phone in the Oval Office with Chief of Staff John Kelly and Vice President Mike Pence at his side. The Trump campaign even canceled two rallies later in the week in Mississippi and Missouri citing the hurricanes. During a press briefing, White House press secretary Sarah Sanders said the White House has been in regular contact with governor’s offices and local authorities from across the country.
“These tropical storms and hurricanes are very dangerous, and we encourage anyone in the path to heed the warnings of state and local officials who have the expertise and knowledge of their communities to provide the best on-ground information,” Sanders said.
At the White House, the president has been receiving constant and updated information on the storms, according to an official. Homeland Security adviser Doug Fears has been working in coordination with the White House, National Security Council and federal government ahead of the storms.
Former FEMA administrator Craig Fugate told ABC News that during the Obama Administration the National Security Council served as the principal representative for the White House on conference calls leading up to major storms to coordinate with the National Hurricane Center, relevant weather service offices and federal agencies as well as states likely to be impacted.
“They’re updating with the forecast, the likely impacts but also looking and talking with the states about likely shortfalls, areas of concern, anything that they would need to adjust their plans on,” Fugate said. “All of this is taking place right now before the storm ever makes landfall and before you ever have certainty of where it’s going to hit.”
This June, the president and first lady visited FEMA for a briefing on hurricane season. Aides admit lessons were learned after the U.S. faced so many storms.
“America has never experienced so many large-scale disasters in so short a period of time,” Trump said. “Our entire government leaped into action to coordinate the response, along with the state and local leaders. And we did have a lot of help from some really great governors – Florida, Texas. A lot of great people helped us, and it was great.”
“We are marshaling every available resource to ensure maximum preparation for rapid response. That's what we had last year. Disaster response and recovery is best achieved when it's federally supported, state-managed, and locally executed,” Trump added.
But there has been criticism about Trump’s overconfidence following the storms, particularly as an independent study commissioned by the Puerto Rican government determined that an estimated 2,975 people died from September 2017 through the end of February 2018, significantly raising Hurricane Maria's death toll from 64 people.
Trump said Governor Ricardo Rosselló is “happy with the job we’ve done.”
“I think we did a fantastic job in Puerto Rico We're still helping Puerto Rico,” Trump said. “The governor is an excellent guy. And he is very happy with the job we've done."
“I think most of the people in Puerto Rico really appreciate what we've done,” Trump added.
Though in announcing the revised death toll late last month, Gov. Rossello conceded that the government could have done more.
"Yes, I made mistakes," he said. "We could have done things differently."
Fugate told ABC News that political criticism regarding the Trump Administration’s response to Hurricane Maria often overlooks just how stretched the government was in its ability to respond to the disaster.
The White House has approved North Carolina and South Carolina’s requests for federal emergency declarations, allowing greater coordination among states and federal agencies.
Tuesday afternoon, Trump approved a federal emergency declaration for Virginia as well.
"The White House should act quickly to declare a federal emergency in Virginia as they did in the Carolinas so we can have federal assets to help Virginians affected by the hurricane,” Sen. Tim Kaine, D-Virginia said in a statement to ABC News.
“You had three back to back record setting hurricanes, Harvey, Irma and then Maria,” Fugate said. “That was going to stretch and break just about any of our systems so you had to adjust and do with what you got. And FEMA has the resources they’re funded for.”