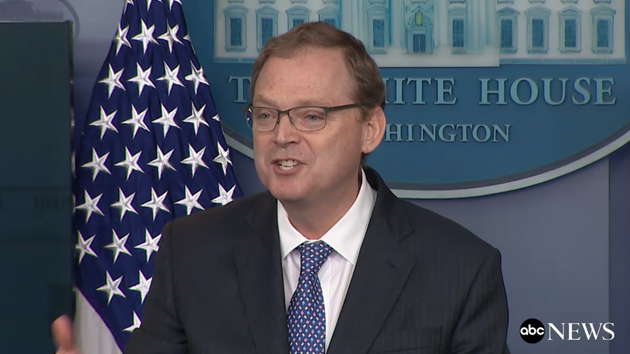 ABCNews.com(WASHINGTON) — White House economist Kevin Hassett fact-checked a seemingly extraordinary claim about the country's GDP growth rate overtaking the unemployment rate for the first time in more than 100 years.
The only catch…the claim was made by his boss, President Trump.
"So I can tell you what is true," Hassett, the chairman of the Council of Economic Advisers, said from the podium of the White House briefing room in response to a question about Trump's tweet from early this morning. "What is true is that it's the highest in 10 years. And at some point, somebody probably conveyed it to him, adding a zero to that, and they shouldn't have done that."
Earlier in the day, Trump made the claim on Twitter.