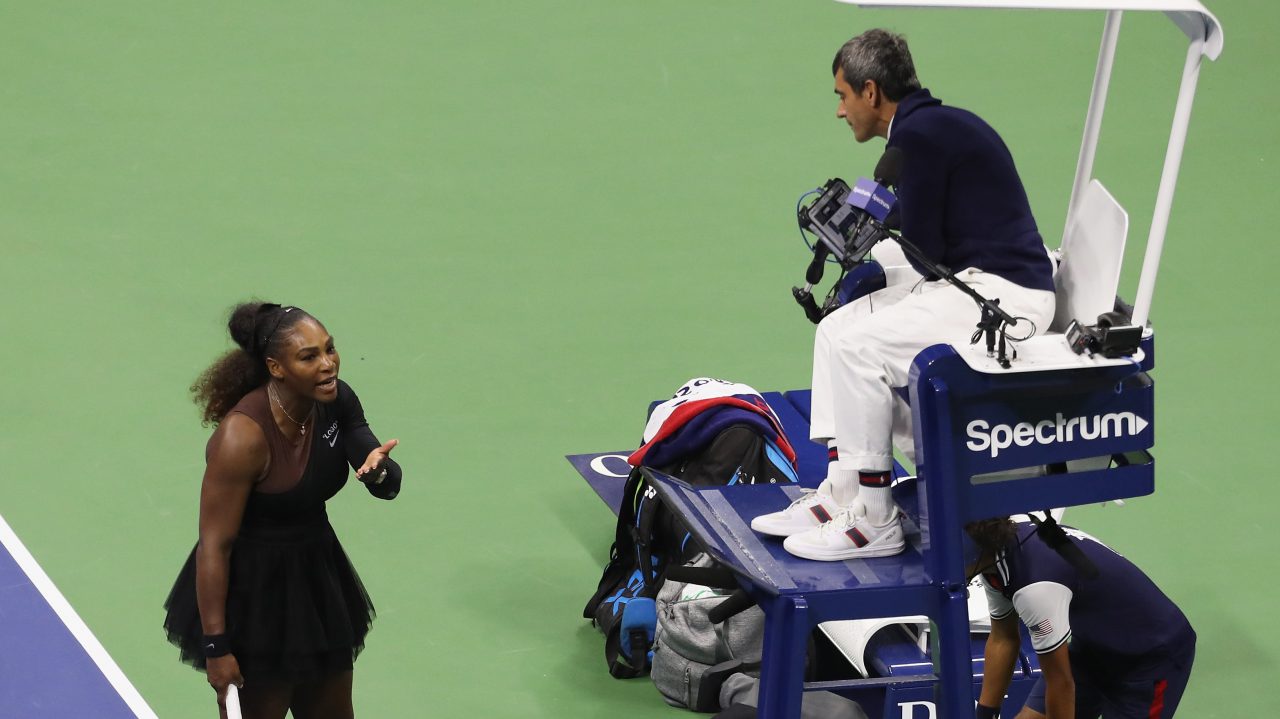 Mike Stobe/Getty Images for USTA(NEW YORK) — It's hard to upstage Serena Williams on the tennis court or to take away the shine from 20-year-old record breaker Naomi Osaka, who became the first Japanese tennis slam winner.
But Carlos Ramos did just that.
The longtime tennis umpire became the subject of widespread scrutiny on Saturday night after a series of calls against Williams during the U.S. Open women's finals.
Ramos is a gold badge-level umpire, who has been the deciding force in a number of high profile matches, but his calls in the finals match prompted outrage both on and off the court.
Ramos gave Williams a penalty because her coach was admittedly coaching from off the court, which is barred in the sport though it is widely understood to be a common practice.
The second penalty came after Williams later smashed her racquet against the ground.
The third incident came shortly after that, when Williams yelled at Ramos over the call, with her calling him a "thief" which then prompted him to classify that as verbal abuse towards the umpire. Because that was her third penalty of the game, the rules of the sports mandate that it prompts a game penalty.
Katrina Adams, United States Tennis Association (USTA) president and CEO, talked about the controversy with ESPN the day after the match.
"I would say last night is unfortunate," Adams said to ESPN. "And we have to have consistency because when you look at what the women, in this case, Serena, is feeling, we watch the guys do this all the time. They're badgering the chair umpires on the changeover. Nothing happens."
As for Ramos, Adams said that "umpires are reviewed throughout the tournaments" and nothing had suggested that he should not be assigned to the women’s final.
"His record was good so there was no reason for us to not be putting him in the chair," Adams said.
"We have to treat each other fairly and the same and I know that what Serena did and her behavior was not welcome and there could have been a line that should have been drawn," Adams said. "But when you look at Carlos or the umpire in this particular situation, it's a 'judgment call' to give that last penalty, because she called him a thief? They've been called a lot worse."
The International Tennis Federation (ITF) released a statement of support for Ramos Monday, standing by Ramos' calls but noting that the situation was a "regrettable incident."
"Carlos Ramos is one of the most experienced and respected umpires in tennis," the ITF said in its statement. "Mr. Ramos’ decisions were in accordance with the relevant rules and were re-affirmed by the U.S. Open’s decision to find Serena Williams for the three offenses."
The statement went on to read: "It is understandable that this high profile and the regrettable incident should provoke debate. At the same time, it is important to remember that Mr. Ramos undertook his duties as an official according to the relevant rule book and acted at all times with professionalism and integrity."
Ramos has umpired an Olympic final match between Andy Murray and Roger Federer and been the one on the court deciding the fate of all four grand slam tennis tournaments, but there has been a share of controversial calls beyond this most recent case.
Wimbledon 2018: Novak Djokovic
Earlier this season, Ramos was the umpire in a match between the Serbian superstar and opponent Kei Nishikori.
Ramos cited Djokovic for two violations during the match, the first of which coming when Djokovic hit his racquet against the ground. Ramos reportedly said that he damaged the famed grass court used in the British tournament, and Djokovic balked.
"I just asked him whether he thought honestly that I damaged the court with the racket that I throw. I mean, anybody who saw the match, I mean, saw that literally I kind of touched the grass," Djokovic said later after the match.
The alleged roughness against the grass wasn't the only issue that arose over that call, as Nishikori allegedly smashed the ground with his racquet during that same match, but Ramos said he didn't see it so Nishikori received no penalty.
French Open 2017: Rafael Nadal
Another male tennis star who has publicly criticized Ramos was Rafael Nadal, this time at Roland-Garros.
Nadal had been issued two warnings for taking too much time during the crossovers in the game when players take a brief break while switching sides of the court.
"I say it with sadness, but he is an umpire who scrutinizes me more and who fixates on me more," Spanish-speaking Nadal told the media after the match.
"He also pressured me about coaching," Nadal said of Ramos, according to Spanish-language sports newspaper Marca.
"I have respect for him and all I ask is for that to be reciprocated," Nadal said, according to Marca.