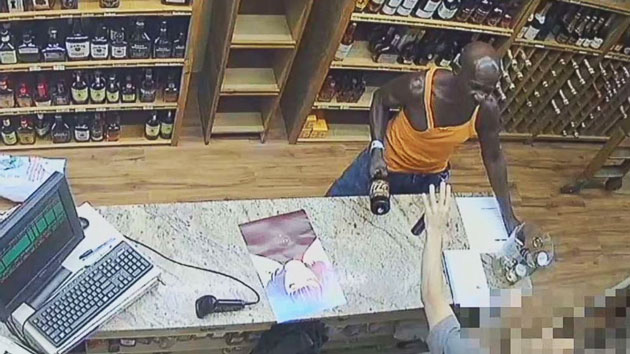 NYPD(NEW YORK) — New York City police are searching for a suspect who allegedly assaulted a store worker by tossing wine bottles at him in one of a pair of violent robberies on Sunday. Alleged assaults at the second robbery scene left two people in serious condition.
Officials with the New York Police Department said a man robbed two stores in Lower Manhattan on Sunday and waged vicious attacks on the stores’ workers.
Police said the suspect, described as a man between 40 and 60 years old, entered Seward Park Liquors at around 12:45 p.m. and threatened to hit the cashier if he didn’t open the cash register.
“The individual approached the 41-year-old male employee with a bottle of liquor in his hands and threatened to hit him with it if the employee didn't give him the money from the cash register,” police said in a statement. “When the employee refused, the individual tried to hit him with the bottle and then continued to throw bottles of liquor at him.”
The NYPD released surveillance video from the scene, showing the suspect throwing glass bottles and chasing the employee around the store. The suspect eventually obtained a key to the cash register and fled the scene with about $200 in cash, according to police. The victim was treated at the scene by emergency medical personnel.
A man matching the same description attacked workers at a shoe store in the same area less than two hours later, police said.
Police said he walked into the Reno Fashion shoe store, located about a mile away from first crime scene, where he allegedly assaulted two employees and “attempted to remove money from the register,” according to the statement.
Video showed the suspect viciously punching and kicking the store workers, a 66-year-old man and an 88-year-old woman, leaving them both in serious condition, according to police.
“In addition he struck the male employee on the head with several glass jars and a large ceramic pot. Both victims suffered numerous lacerations to their heads and were removed to Bellevue Hospital in serious but stable condition,” the NYPD statement said.
Police said he fled the scene on foot, but it was unclear if he had stolen anything.
The NYPD released images and video from the scenes on Sunday, asking anyone with information to call the its Crime Stoppers Hotline at 1-800-577-TIPS.