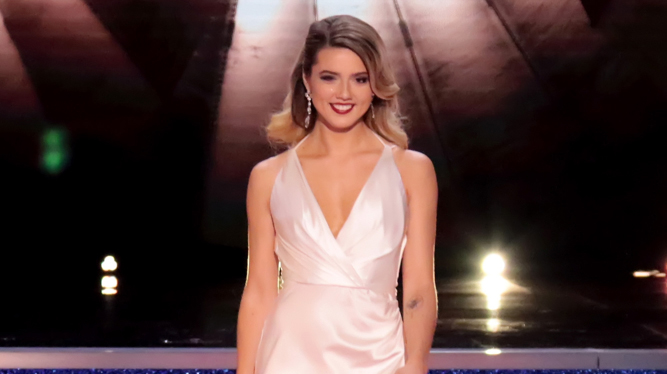 Donald Kravitz/Getty Images(NEW YORK) — Miss Michigan may not have wowed the judges enough to make it to the final rounds of this year's Miss America competition, but she certainly earned some admiration online.
Emily Sioma, who competed in Sunday's pageant representing Michigan, used her introduction as a chance to make a statement about her state's ongoing water crisis.
"From a state with 84 percent of the U.S. fresh water but none for its residents to drink, I am Miss Michigan, Emily Sioma," she said during the broadcast.
Sioma told ABC News that "it wasn't a very spur of the moment decision," having thought about making a statement about the water crisis for two days leading up to the competition.
"I had this gut feeling that if I didn't make it into the top 15, I would never have a chance to be able to speak on national television about something that was important to me, or to make the moment meaningful," Sioma said.
"I just really wanted to make sure people understood this isn't just about Flint anymore. It still is about Flint but it's about the communities across the state that are impacted by contaminated water," Sioma said.
Sioma was applauded by many Twitter users for using her platform to bring up the issue of the Michigan water crisis on a national level.
Sioma, who did not advance to the next level of the competition, acknowledged to ABC News that her phrasing "was very hyperbolic," but said that she did that to drive the point home.
The statistic she cited comes from the Environmental Protection Agency, which reports that the Great Lakes make up 84 percent of North America's surface fresh water.
The trouble with Sioma's summary of that statistic is that the Great Lakes are not limited to just Michigan. They include Lakes Superior, Michigan, Huron, Erie and Ontario, and stretch for more than 750 miles. Different parts of the various lakes are considered part of the jurisdictions of other states, including Wisconsin, Minnesota, Illinois, Ohio, Indiana, Pennsylvania and New York, as well as Canada.
Sioma said that while most of the response to her comment has been positive, there are also some people pointing out that she said "none" of the water is making it to Michigan residents. "We know that's not true," said Sioma.
"It wasn't supposed to be an educational lesson. It was supposed to be a call to action," she said.
The water crisis in Michigan first gained notoriety when it was discovered that cost cutting measures led to unsafe levels of lead in drinking water in the city of Flint.
Concerns about unsafe water have spread to other parts of the state as well. The Detroit Free Press reported last week that drinking water was cut off in Detroit public schools out of concern about safe drinking levels, forcing school children drink from water coolers and bottled water.
Sioma said that she's pleased with the largely positive response that her introduction has made both online and offline, saying that her phone has "been blowing up" since the competition aired.
"Having this opportunity to reignite the conversation about the water crisis in Michigan… that to me is more about what Miss America is than just winning a crown," she said.