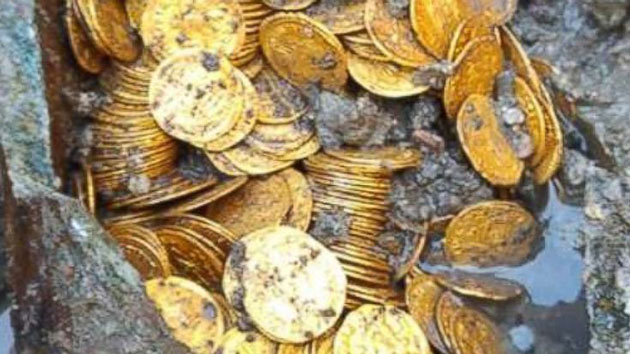 Italian Ministry of Culture
Posted on September 10, 2018 by ABC News

Italian Ministry of Culture(ROME) — It was an amphora, not a pot, but archaeologists found a literal jackpot in a dig in northern Italy last week. No word on if there was a rainbow.
Hundreds of gold coins dating from Rome's late Imperial era, the 4th or 5th century, were found Friday at a dig in Como, Italy, according to the Italian Ministry of Culture.
The ministry shared photos of the shiny coins, which were spilling out of an amphora — a Roman jar with two handles — buried in the dirt.
Minister Alberto Bonisoli said the discovery "fills me with pride."
"We do not yet know in detail the historical and cultural significance of the finding," Bonisoli said in Italian on Facebook, "but that area is proving to be a true treasure for our #archaeology."
The discovery was made at a dig taking place at Teatro Cressoni, a theater in Como that shut down in 1997 and has since been demolished. The Ministry of Culture said the excavation was being carried out within the "restructuring" of the theater.
It's unclear how much the hundreds of coins could be worth.
Como is in northern Italy, on the border with Switzerland, and about an hour north of Milan and a four-hour train ride from Rome.
Copyright © 2018, ABC Radio. All rights reserved.