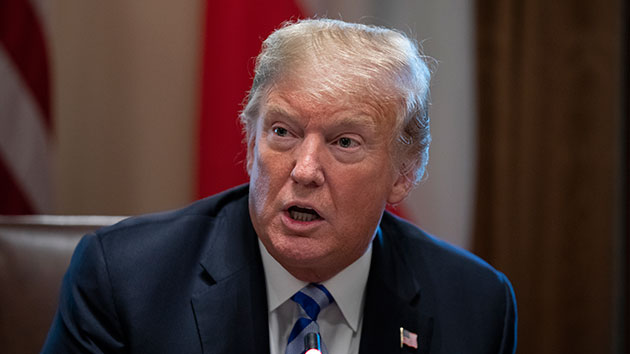 Alex Edelman/Getty Images(WASHINGTON) — President Trump reignited the national anthem controversy just hours before the NFL was getting ready to open its first full day of the season.
The president tweeted that viewership for National Football League games is down, suggesting that if players "stood proudly" for the national anthem, "ratings could come back."
"Wow, NFL first game ratings are way down over an already really bad last year comparison," the president tweeted Sunday morning. "Viewership declined 13%, the lowest in over a decade. If the players stood proudly for our Flag and Anthem, and it is all shown on broadcast, maybe ratings could come back? Otherwise worse!"
ABC News could not immediately confirm the NFL's viewership numbers.
The NFL, which will kick off a full complement of games at 1 p.m. ET, has been embroiled in the national anthem controversy ever since Colin Kaepernick first took a knee during the playing of the national anthem in 2016. He hasn't played since the end of that season.
Last month, President Trump blasted NFL players who protested during preseason games and suggested that they should be "suspended without pay."
“The NFL players are at it again – taking a knee when they should be standing proudly for the National Anthem. Numerous players, from different teams, wanted to show their “outrage” at something that most of them are unable to define. They make a fortune doing what they love………..,” Trump stated.
Copyright © 2018, ABC Radio. All rights reserved.